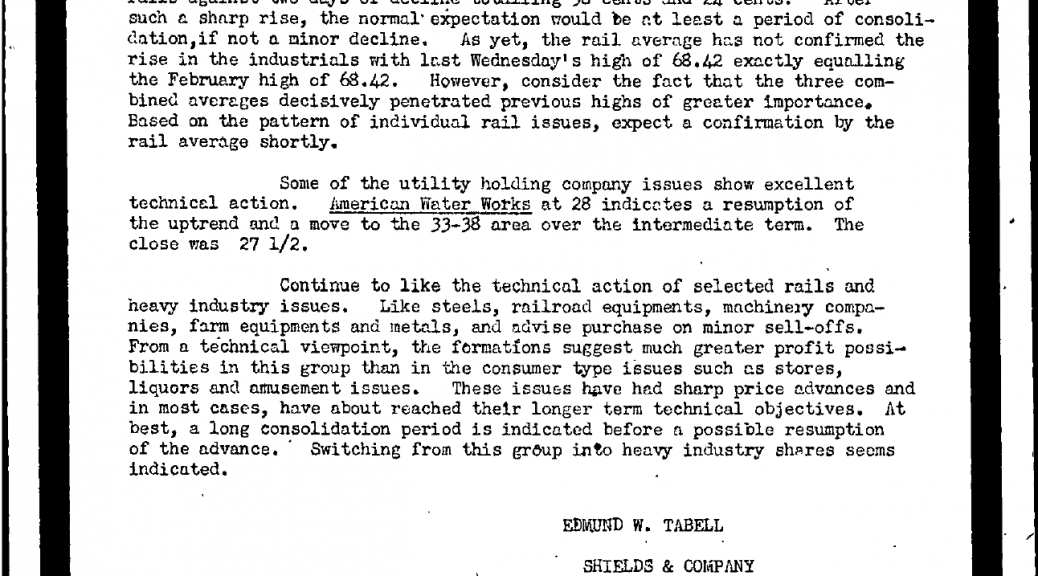 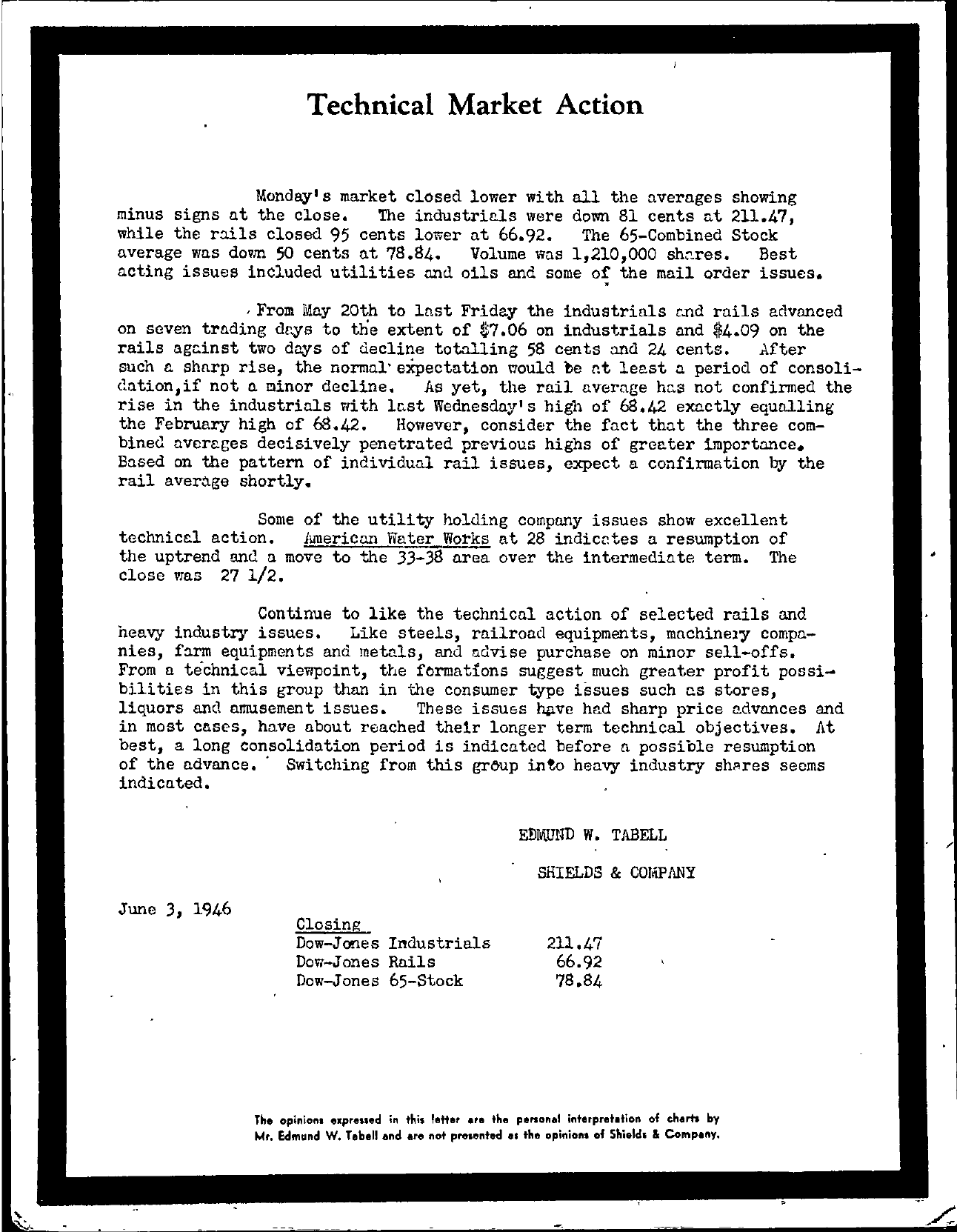 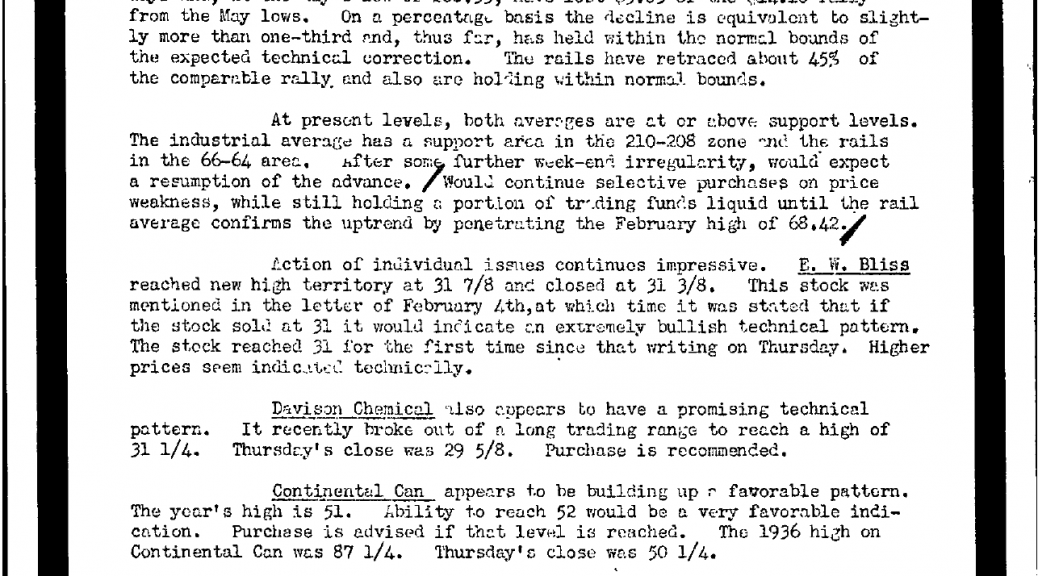 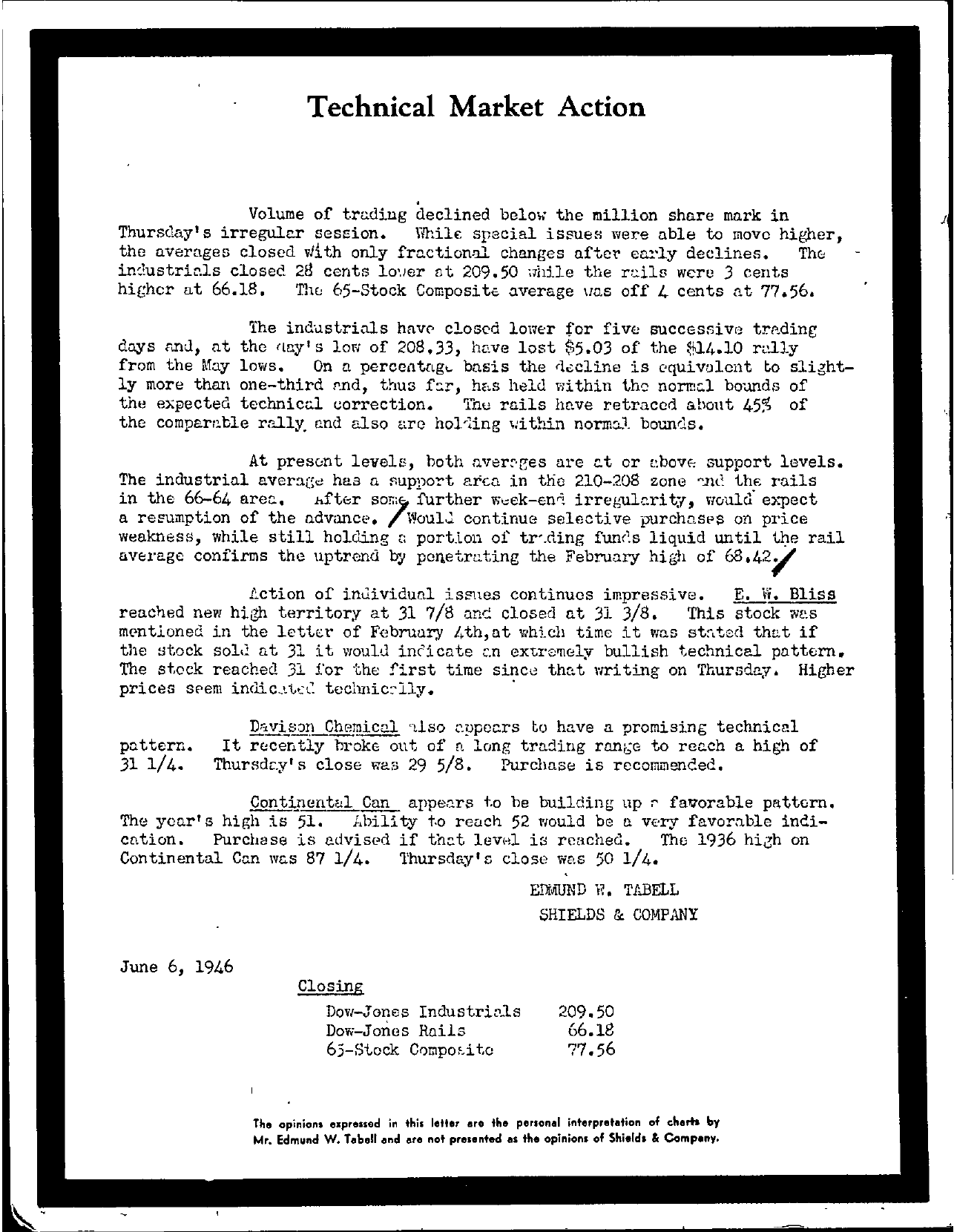 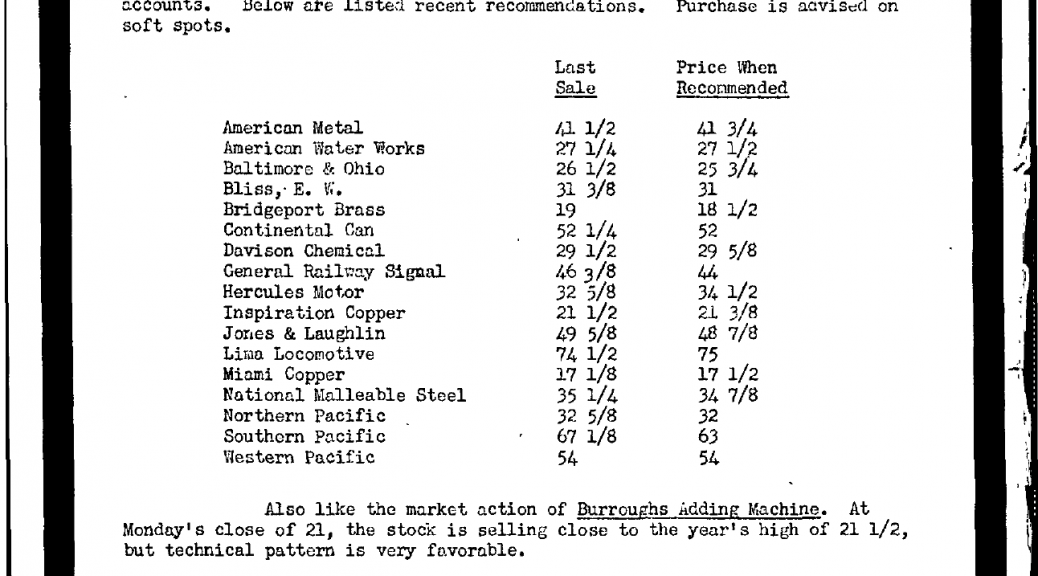 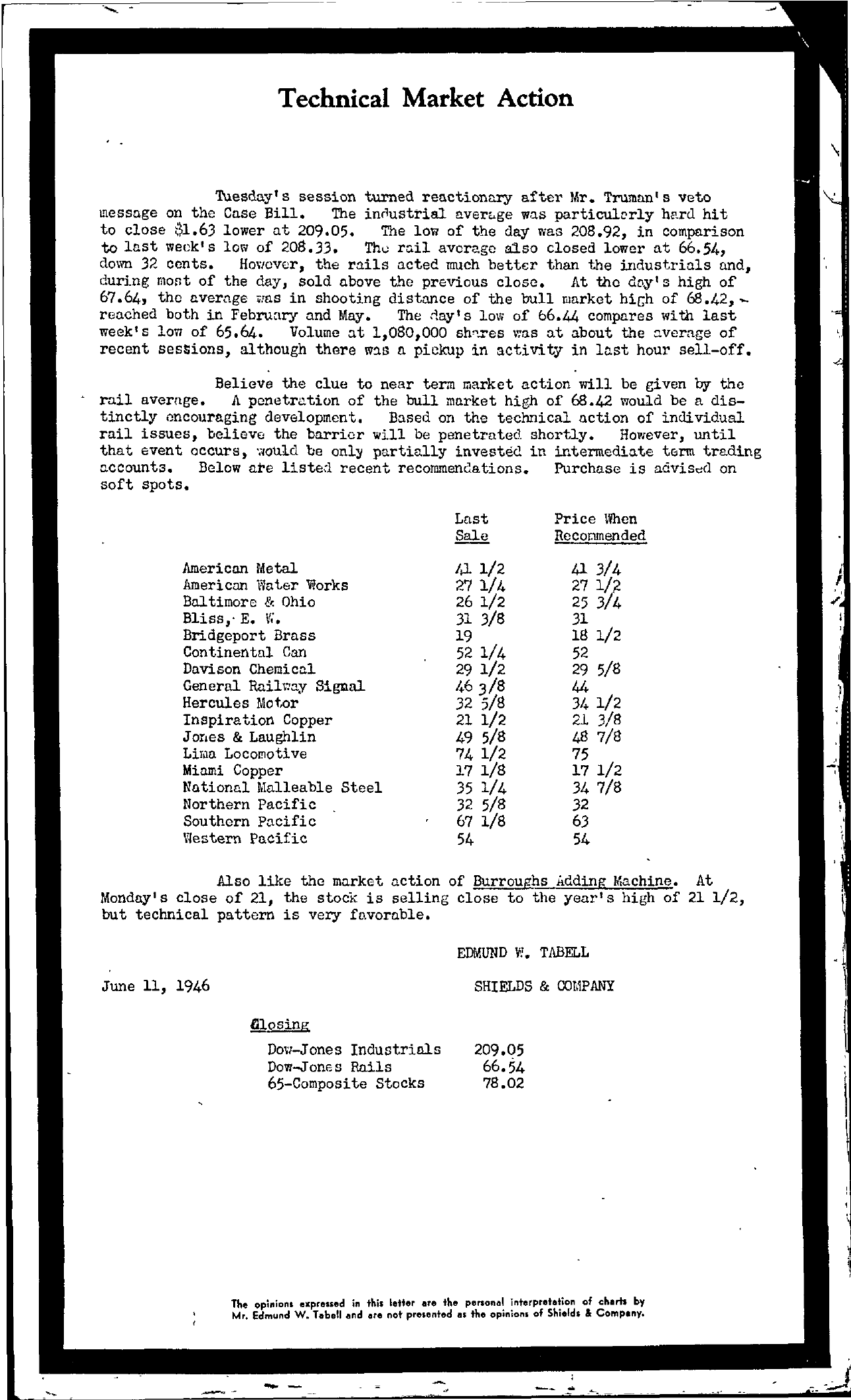 Technical Market Action Tuesday's session turned reactionary after Mr. Truman's veto message on the Case Bill. The industrial was particularly hard hit to close 1.63 lower at 209.05. The low of the day was 208.92, in comparison to last week's low of 208.33. rail average also closed lower at 66.54, down 32 cents. However, the rails acted much better than the industrials and, during month of the day, sold above the previous close. At the day's high of 67.64, the average was in shooting distance of the bull market high of 68.42,- reached both in February and May. The nay's low of 66.44 compares with last week's low of 65.64. Volume at 1,080,000 at about the average of recent sessions, although there was a pickup in activity in last hour sell-off. Believe the clue to near term market action will be given by the rail average. A penetration of the bull market high of 68.42 would be a distinctly encouraging development. Based en the technical action of individual rail issues, believe the barrier will be penetrated shortly. However, until that event occurs, Would be only partially invested in intermediate term trading accounts. Below are listed recent recommendations. Purchase is advised on soft spots. Last Price When Sale Recommended Also like the market action of Burroughs Adding Machine. At Monday's close of 21, the stock is selling close to the years high of 21 1/2, but technical pattern is very favorable. June 11, 1946 EDMUND W. TABELL SHIELDS & COMPANY Closing Dow-Jones Industrials Dow-Jones Rails 65-Composite Stocks 209.05 66.54 78.02 The opinions expressed in this letter are the personal interpretation of charts by Mr. Edmund W. Tabell and are not presented as the opinions of Shields & Company. 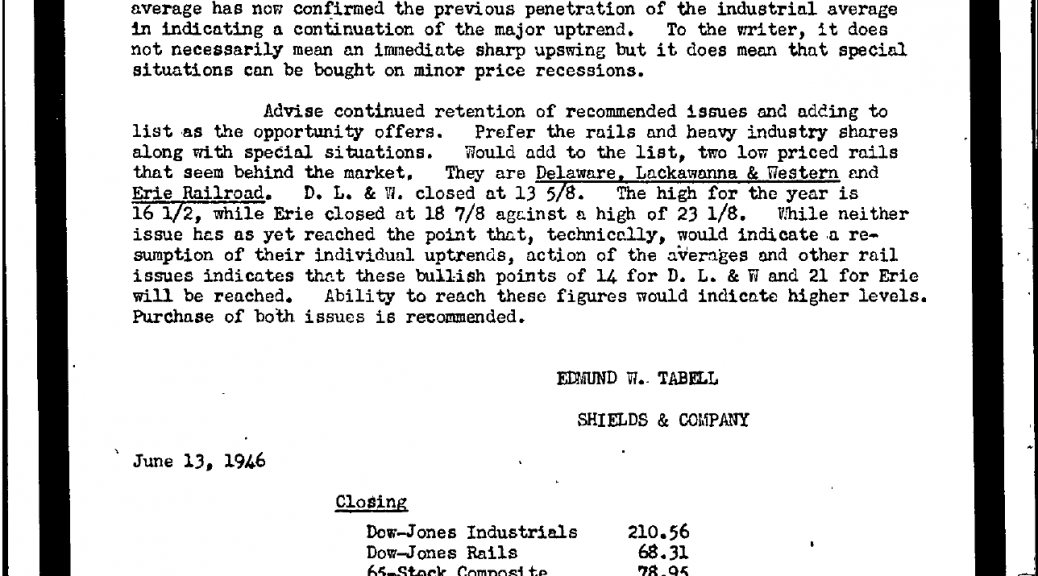 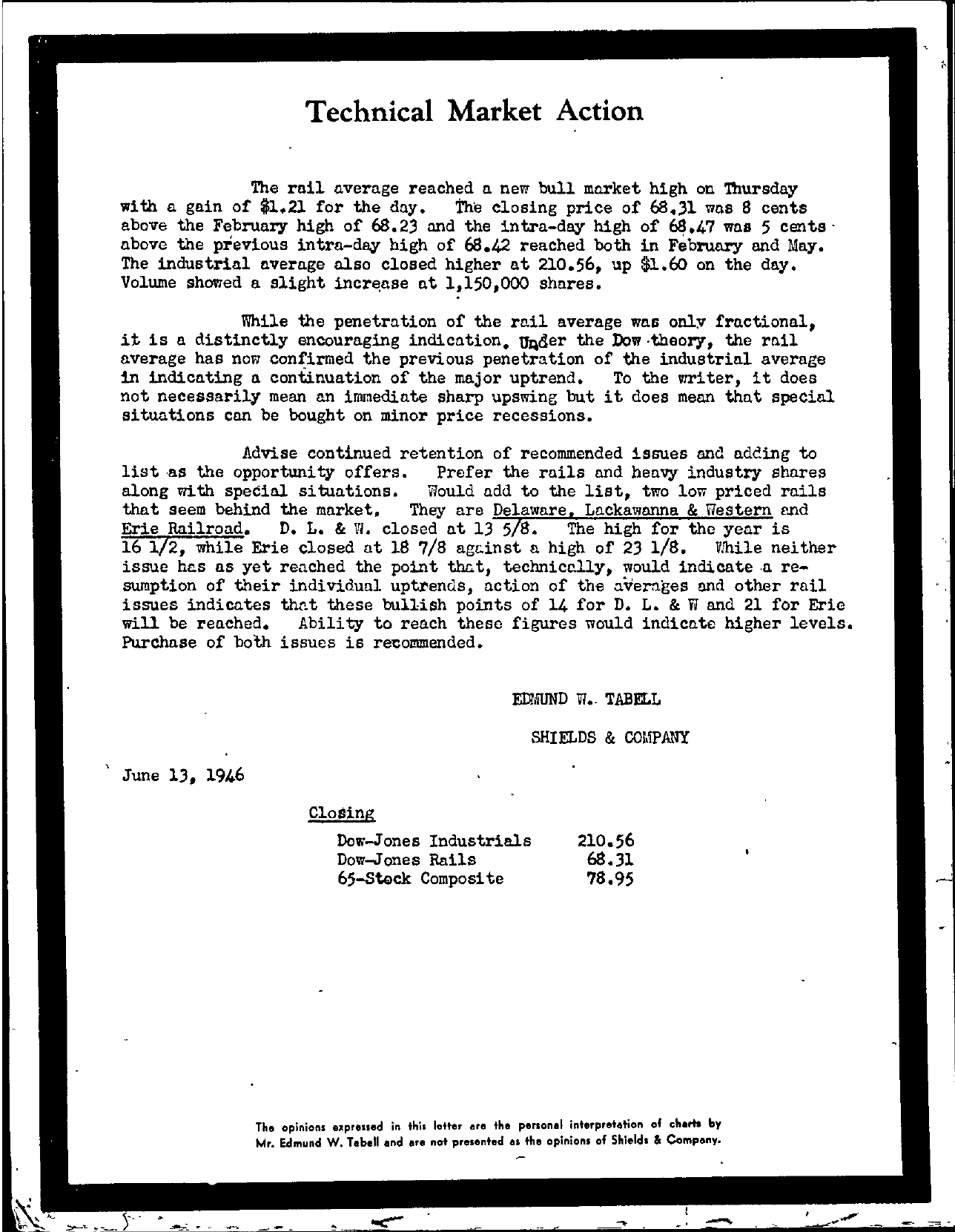 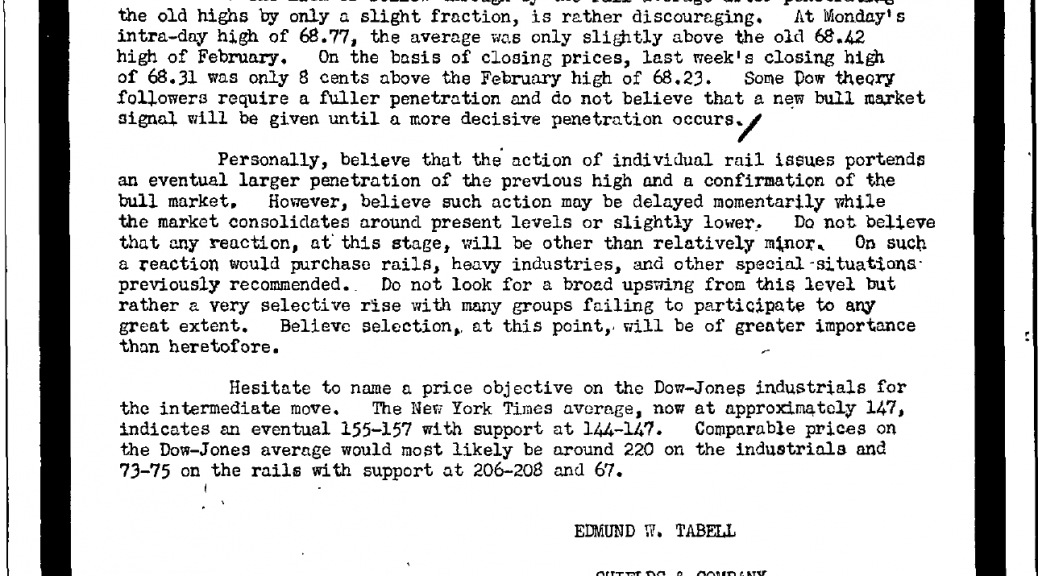 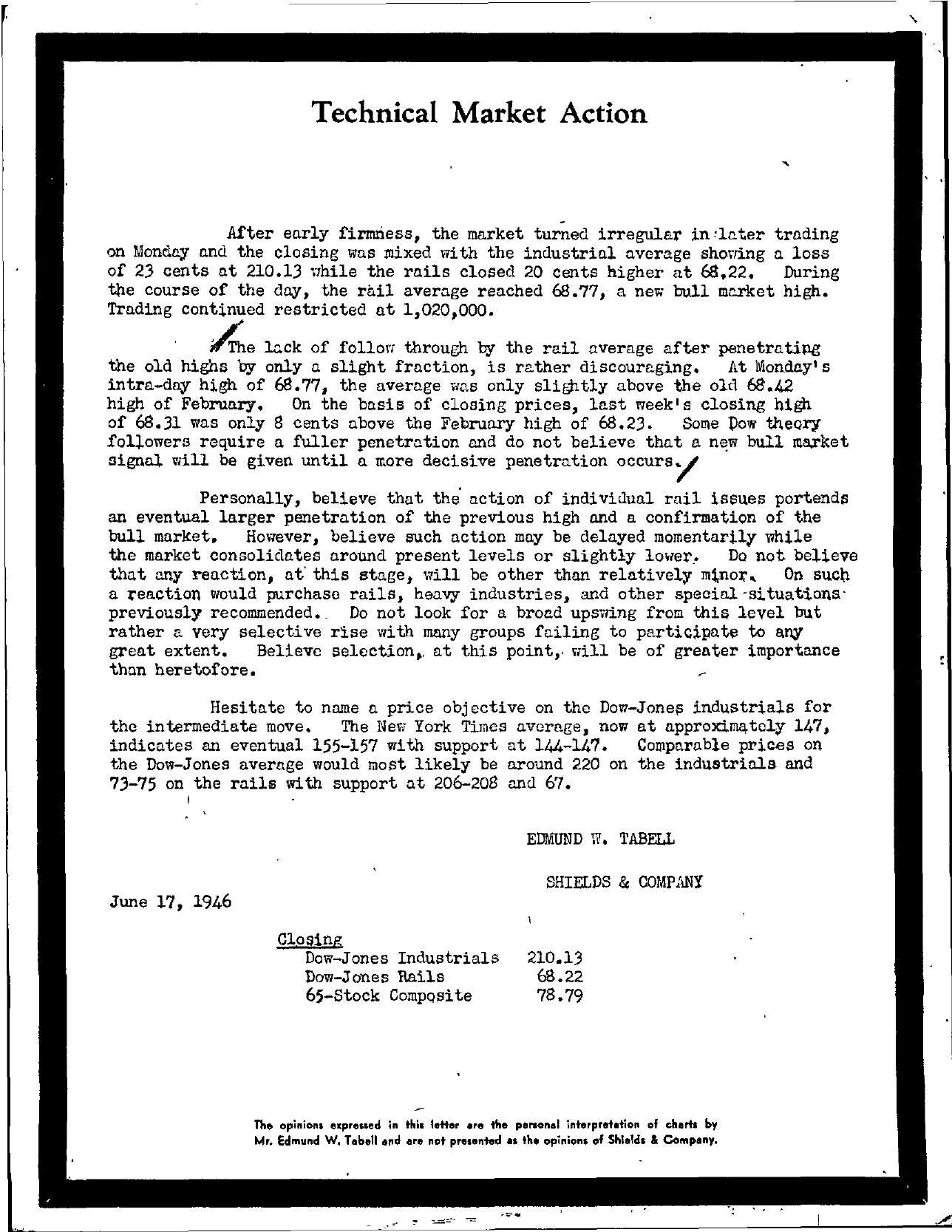 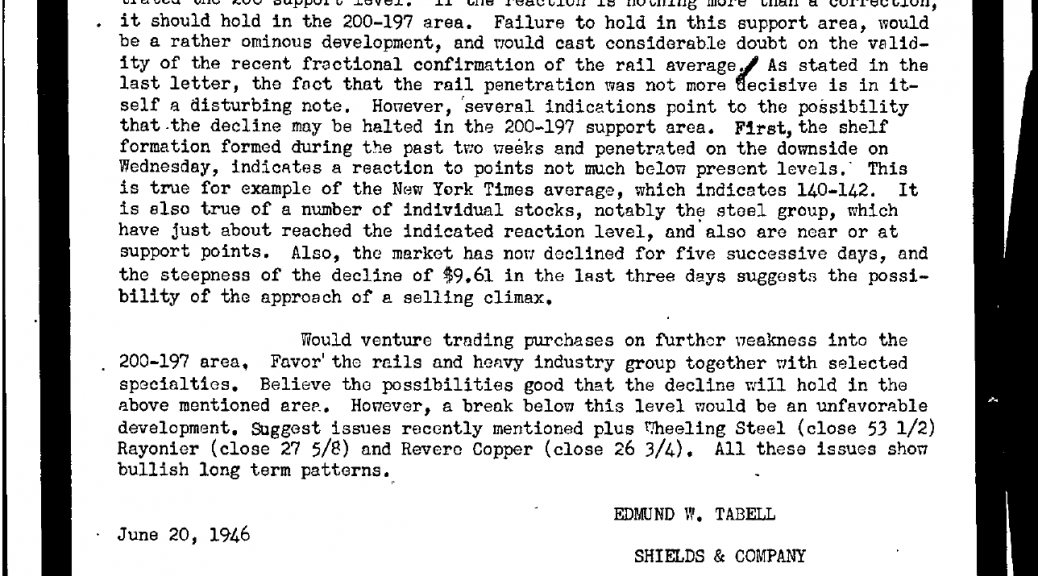 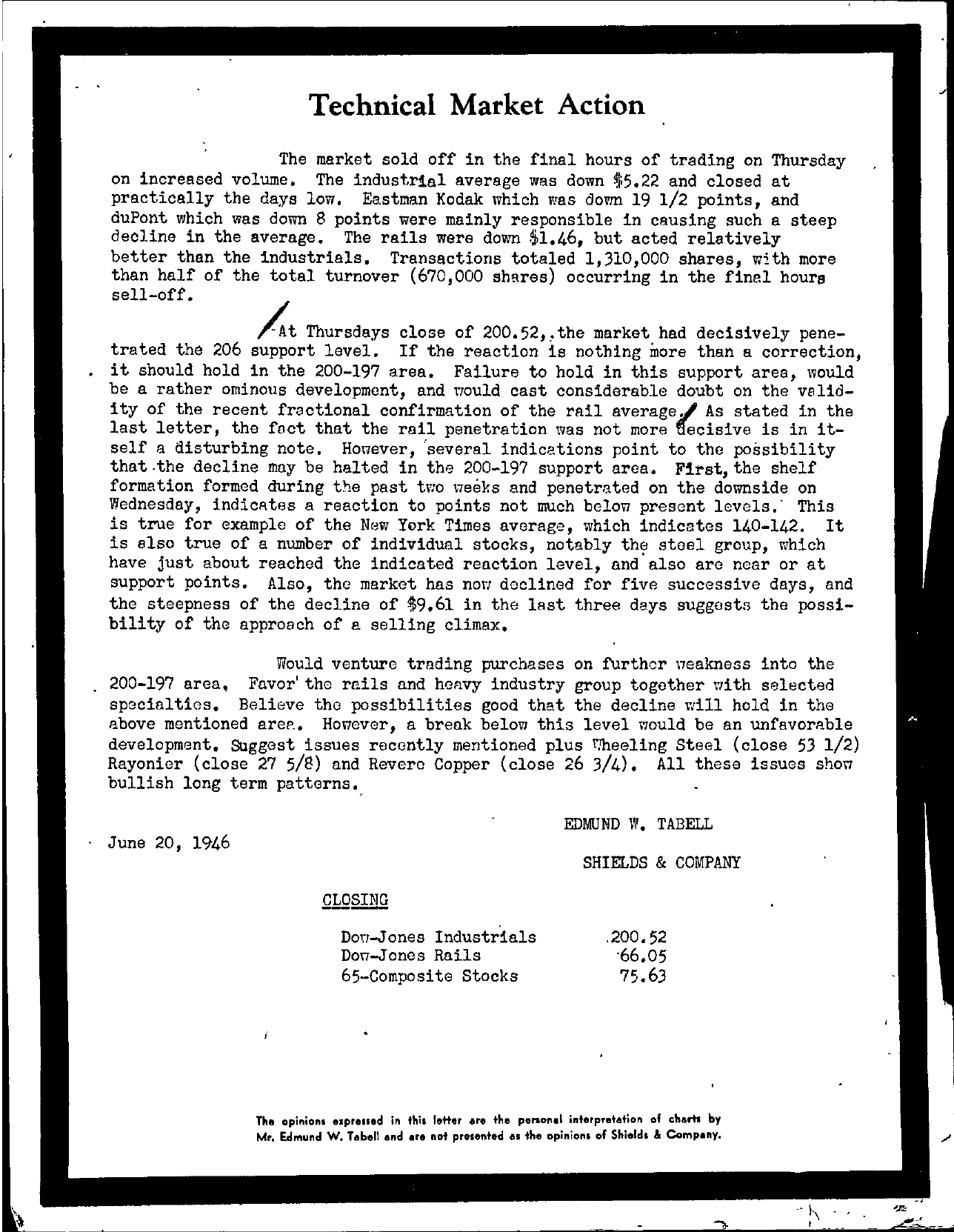 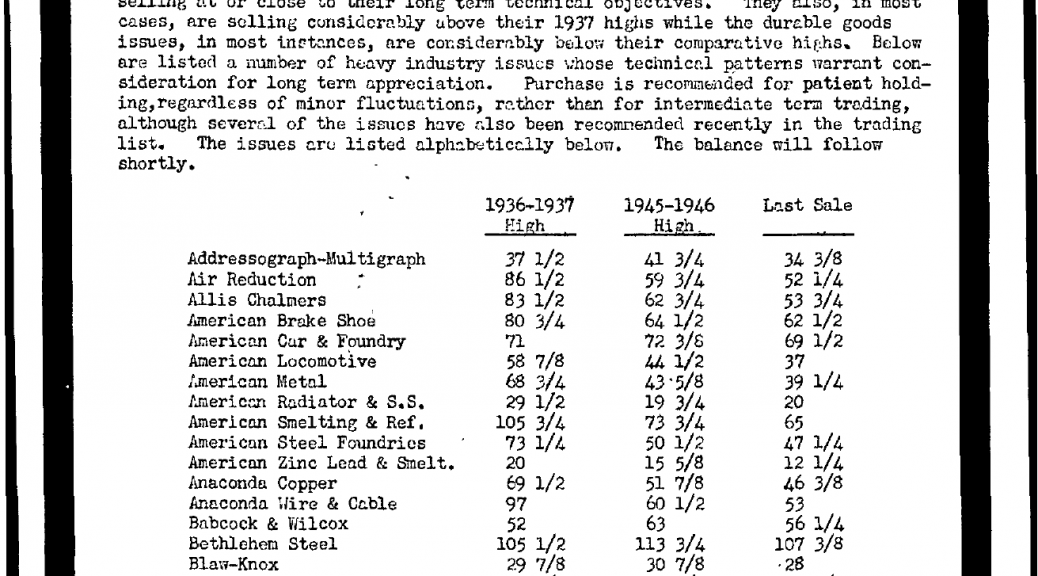 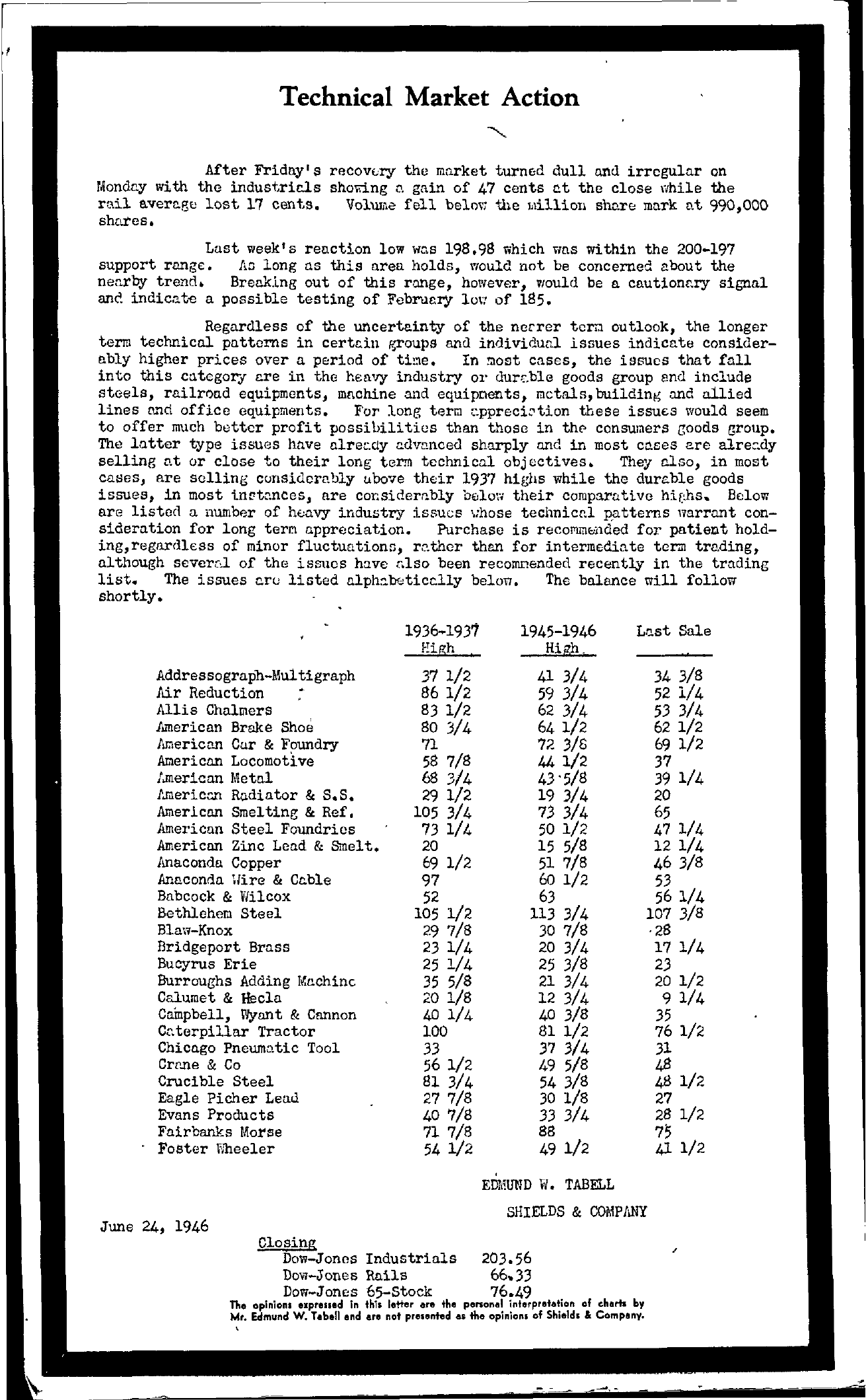 Technical Market Action After Friday's recovery the market turned dull and irregular on Monday with the industrials showing n gain of 47 cents at the close while the rail average lost 17 cents. Volume fell below the million share mark at 990,000 shares. Last week's reaction low was 198.98 which was Within the 200-197 support range. An long as this area holds, would not be concerned about the nearby trend. Breaking out of this range, however, would be 11 cautionary signal and indicD.t a possible testing of February low of 185. Regardless of the uncertainty of the term outlook, the longer term technical patterns in certain and individual issues indicate consider- ably higher prices over a period of In most cases, the issues that fall into this category are in the heavy industry or durable goods group end include steels, railroad equipment, machine and equipment, metals, building and ailied lines and office equipment. For long term these issues would seem to offer much better profit possibilities than those in the consumers goods group. The latter type issues have already advanced sharply and in most cases are already selling at or close to their long term technical objectives. also, in most cases, are selling considerably above their 1937 highs while the durable goods issues, in most instances are below their comparative highs. Below are listed a number of heavy industry issues whose technical patterns warrant consideration for long term appreciation. Purchase is recommended for patient holding regardless of minor fluctuation, rather than for intermediate term trading, although of the issues have also been recommended recently in the trading list. The issues are listed below. The balance will follow shortly. EDMUND W. TABELL SHIELDS & COMPANY Closing Dow-Jones Industrials 203.56 Dow-Jones Rails 66.33 Dow-Jones 65-stock 76. The opinions expressed in this letter are the personal interpretation of charts by Mr. Edmund W. Tabell and are not presented as the opinions of Shields & Company. 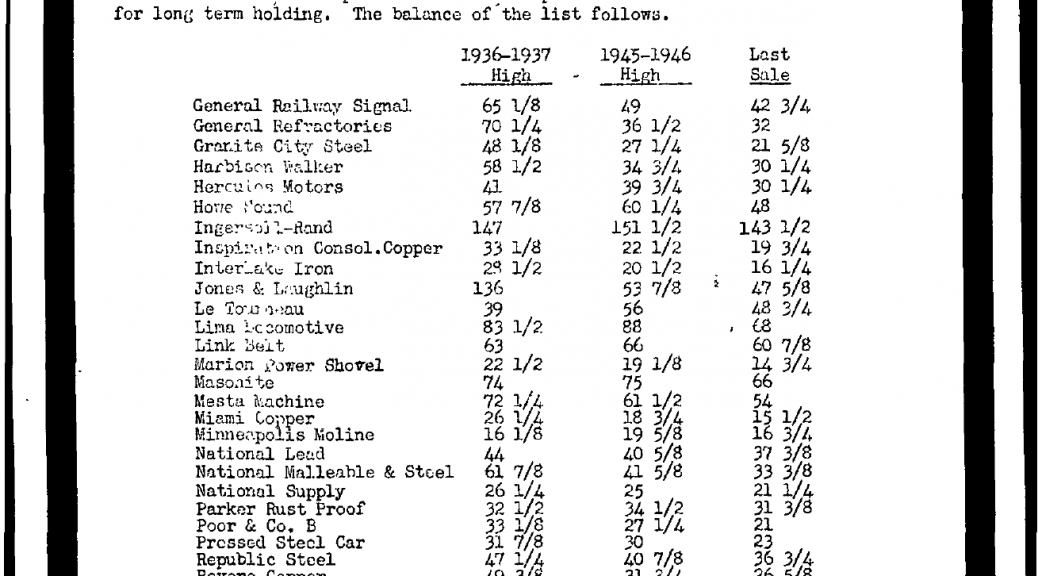 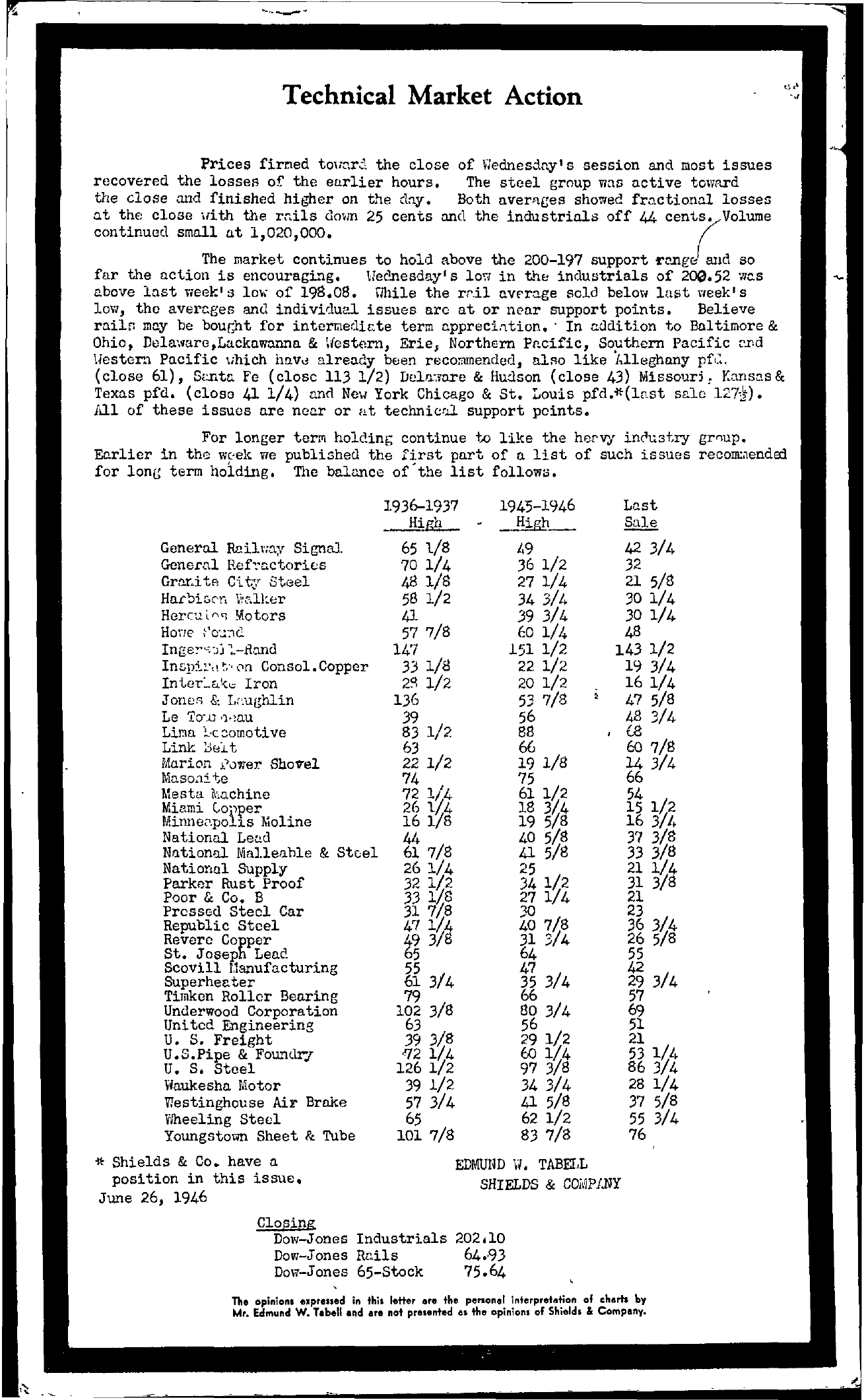