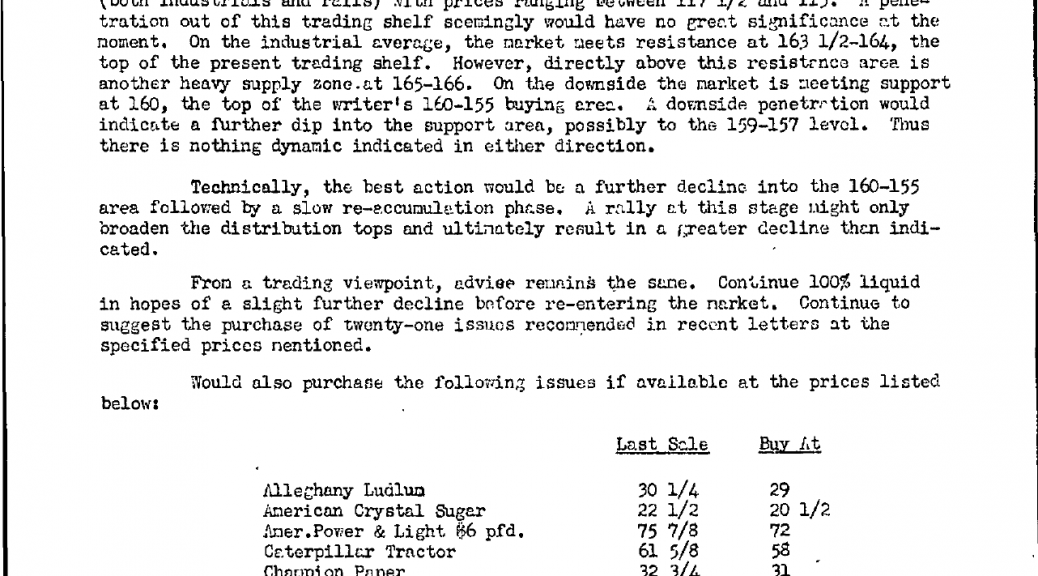 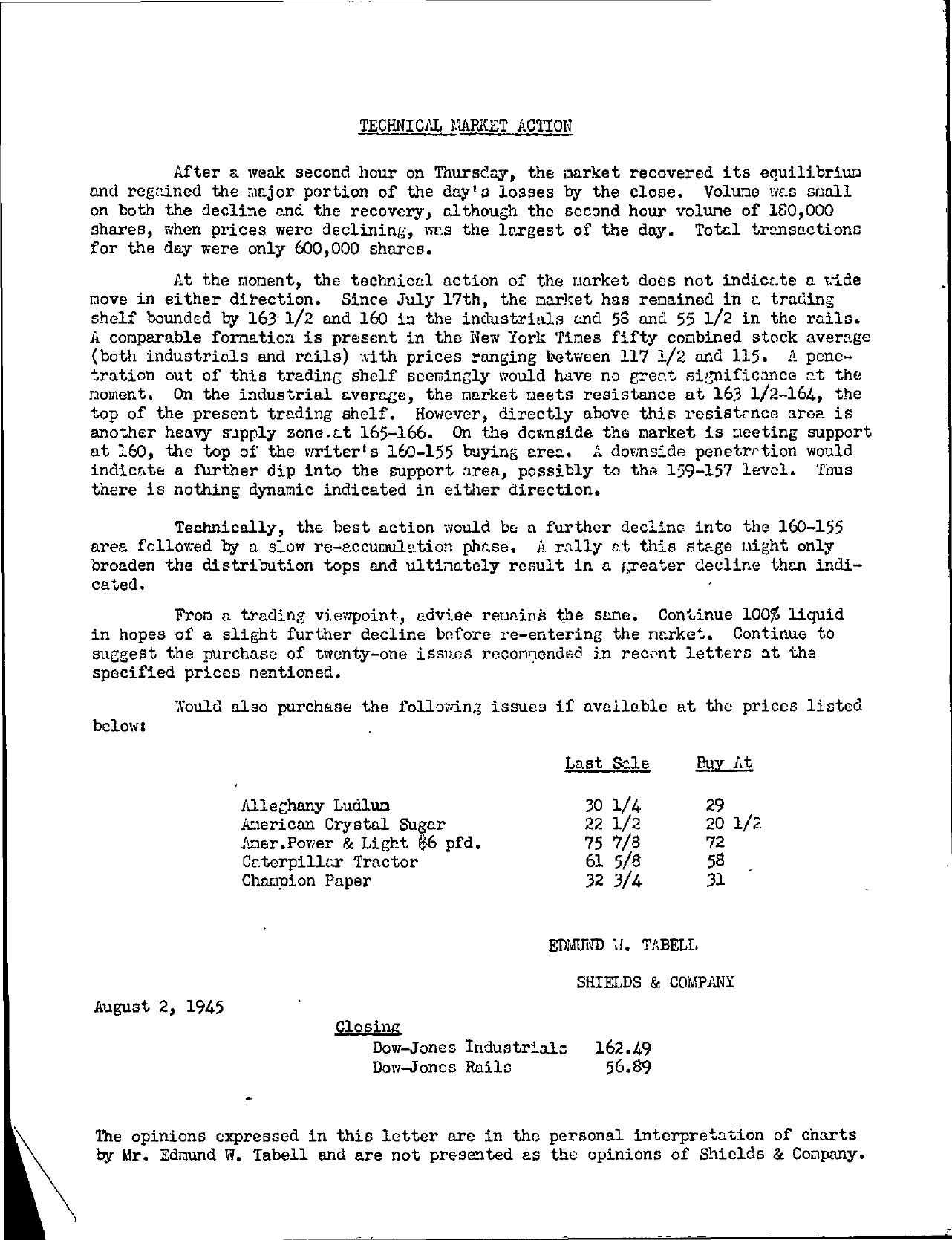 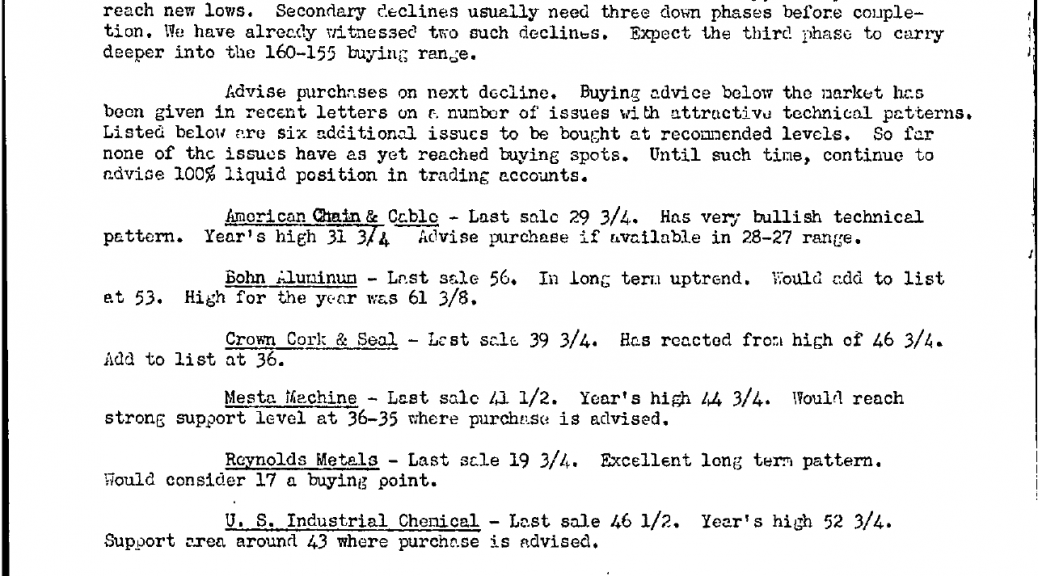 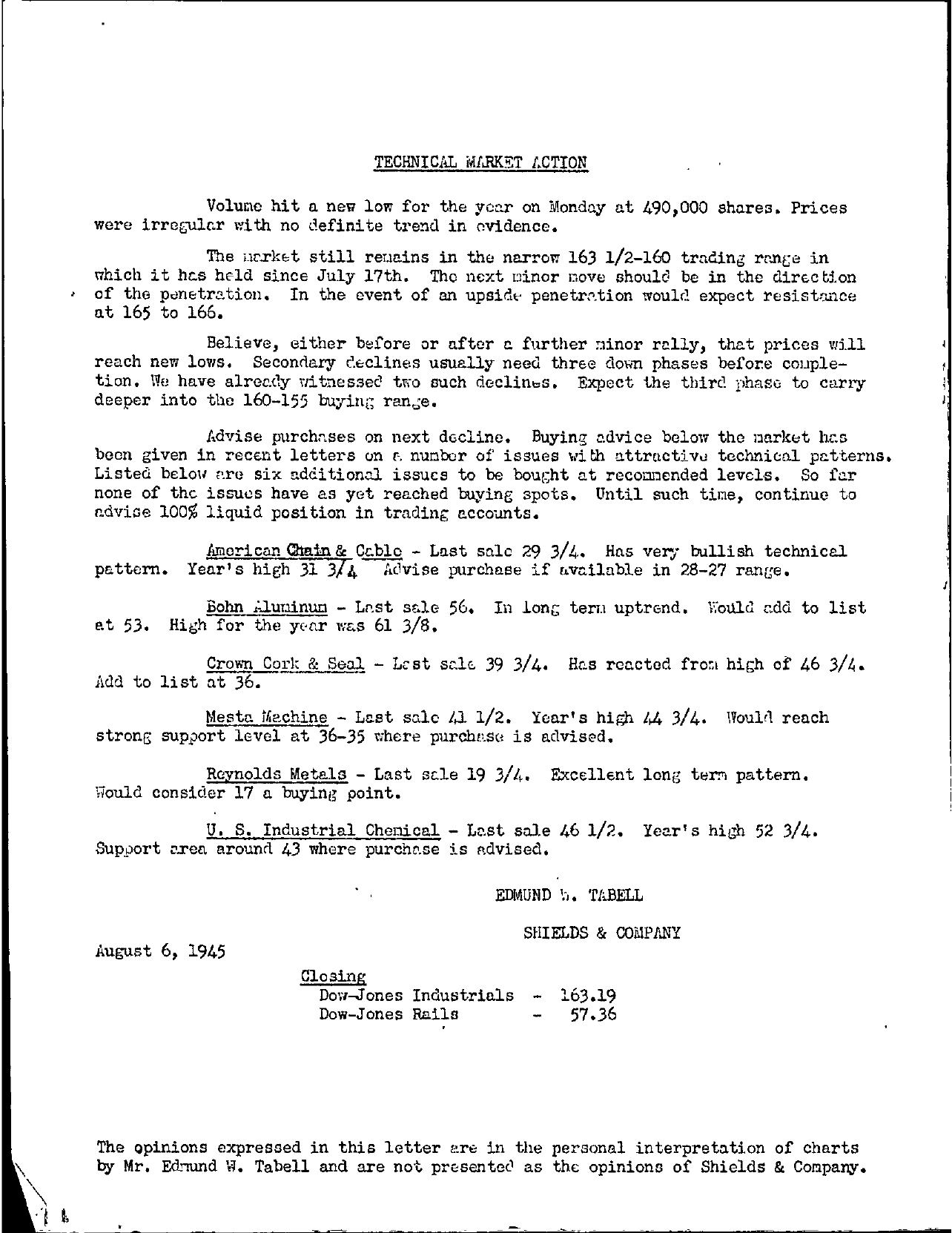 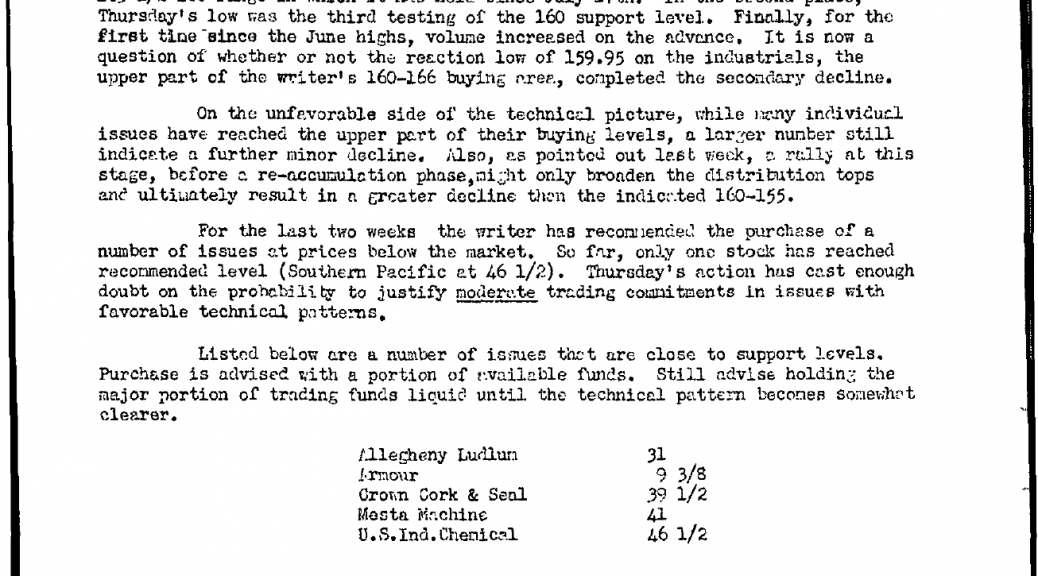 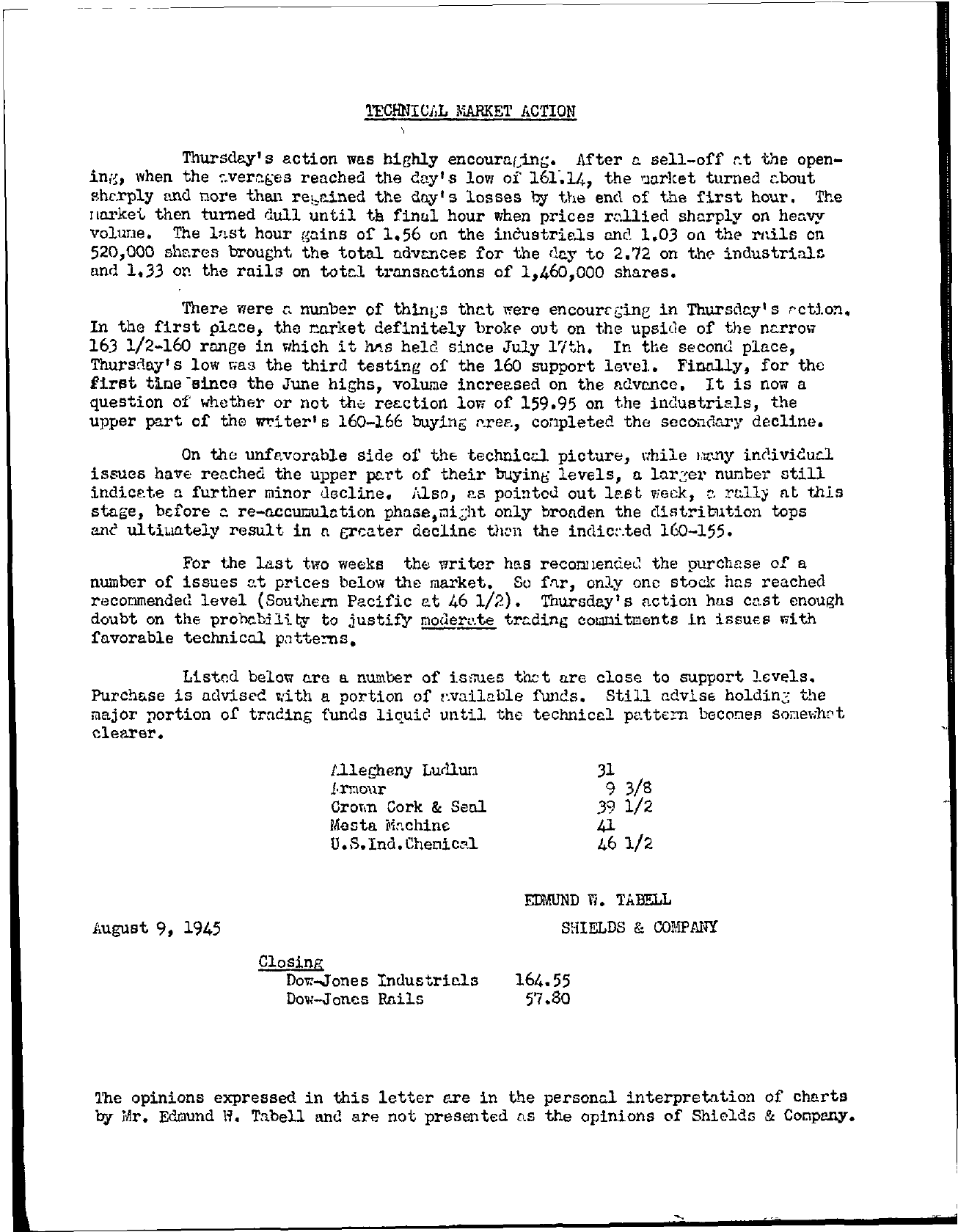 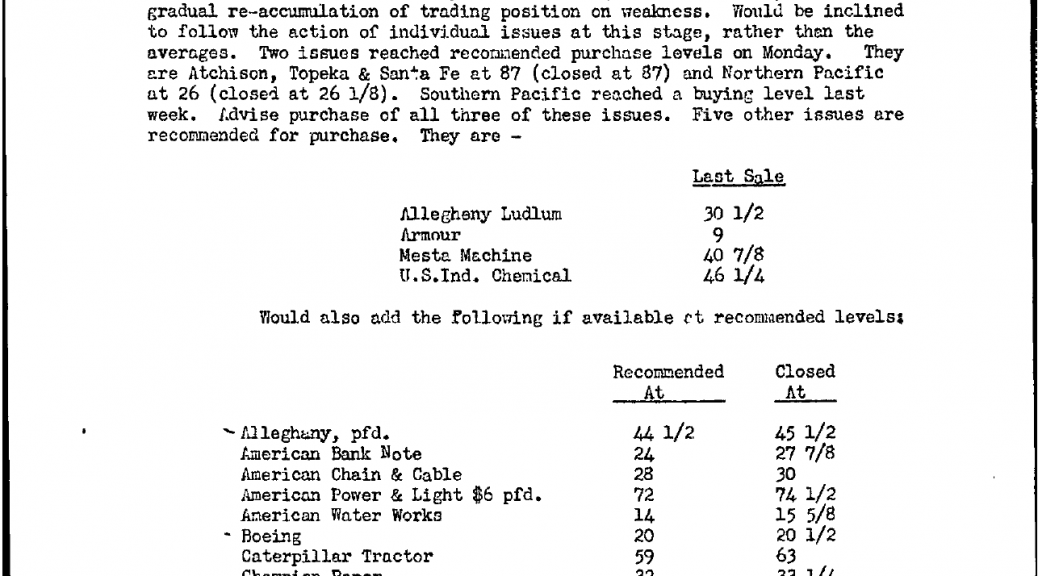 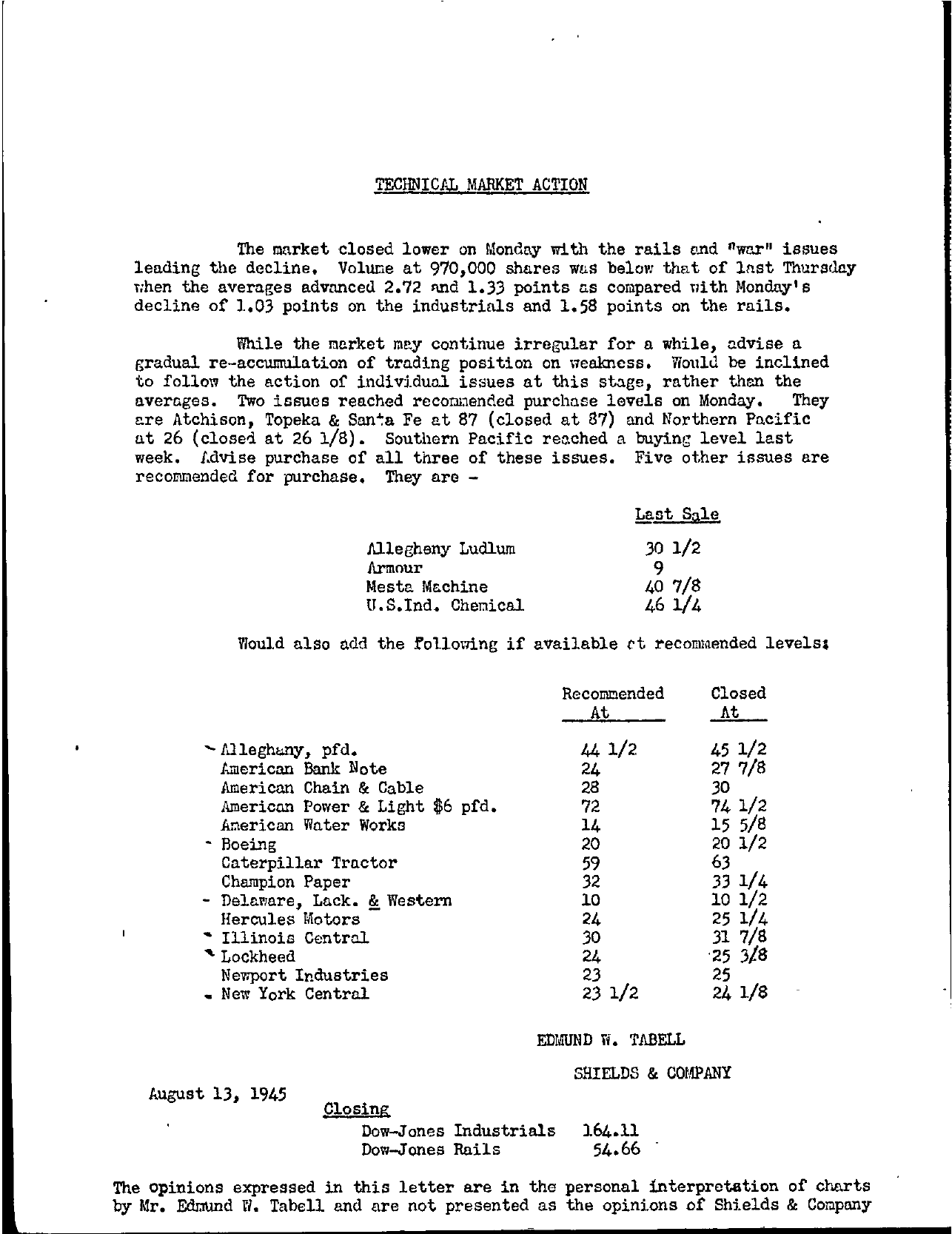 TECHNICAL MARKET ACTION The market closed lower on Monday with the rails and war issues leading the decline. Volume at 970,000 shares was below that of last Thursday when the averages advanced 2.72 and 1.33 points as compared with Mondays decline of 1.03 points on the industrials and 1.58 points on the rails. While the market may continue irregular for a while, advise a gradual re-accumulation of trading position on weakness. Would be inclined to follow the action of individual issues at this stage, rather than the averages. Two issues reached recommended purchase levels on Monday. They are Atchison, Topeka & Fe at 87 (closed at S7) and Northern Pacific at 26 (closed at 26 l/S). Southern Pacific reached a buying level last week. Advise purchase of all three of these issues. Five other issues are recommended for purchase. They are – Allegheny Ludlum Armour Mesta Me-chine U.S .lnd. Chemical Would also add the following if available at recommended levels, ….. Alleghany, pfd. American Bank Note American Chain & Cable Power & Light 6 pfd. Water Works Boeing Caterpillar Tractor Champion Paper – Delaware, Lack. Western Hercules Motors , Illinois Central … Lockheed Newport Industries New York Central Recommended At 44 1/2 24 28 72 14 20 59 32 10 24 30 24 23 23 1/2 Closed At 45 1/2 27 7/S 30 74 1/2 15 5/8 20 1/2 63 331/4 10 1/2 25 1/4 31 7/8 '25 3/8 25 24 1/8 EDMUND W. TABELL August 13, 1945 SHIELDS & COMPANY Closing Dow-Jones Industrials Dow-Jones Rails The opinions expressed in this letter are in the personal interpretation of charts by Mr. Edmund W. Tabell and are not presented as the opinions of Shields & Company 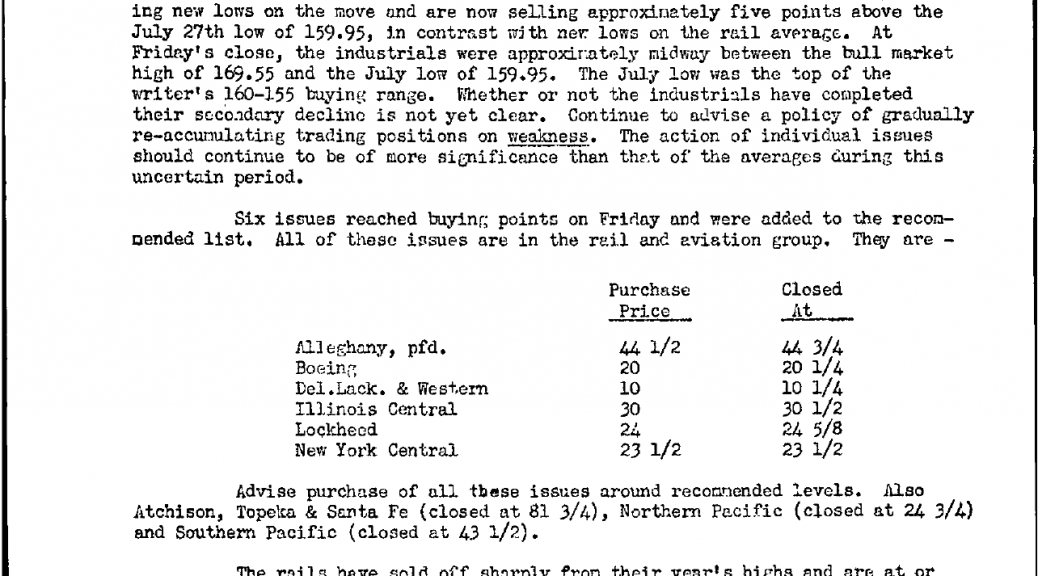 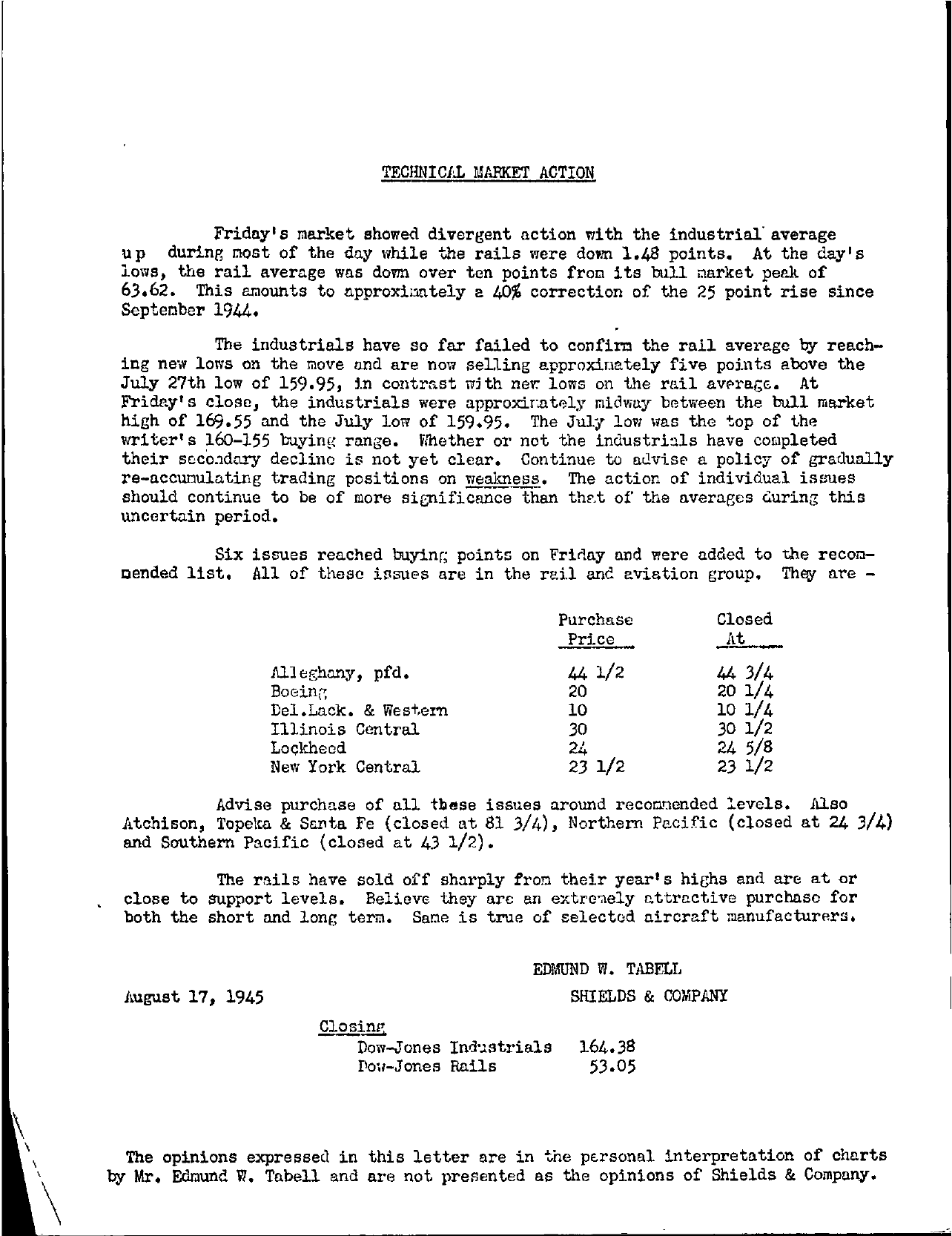 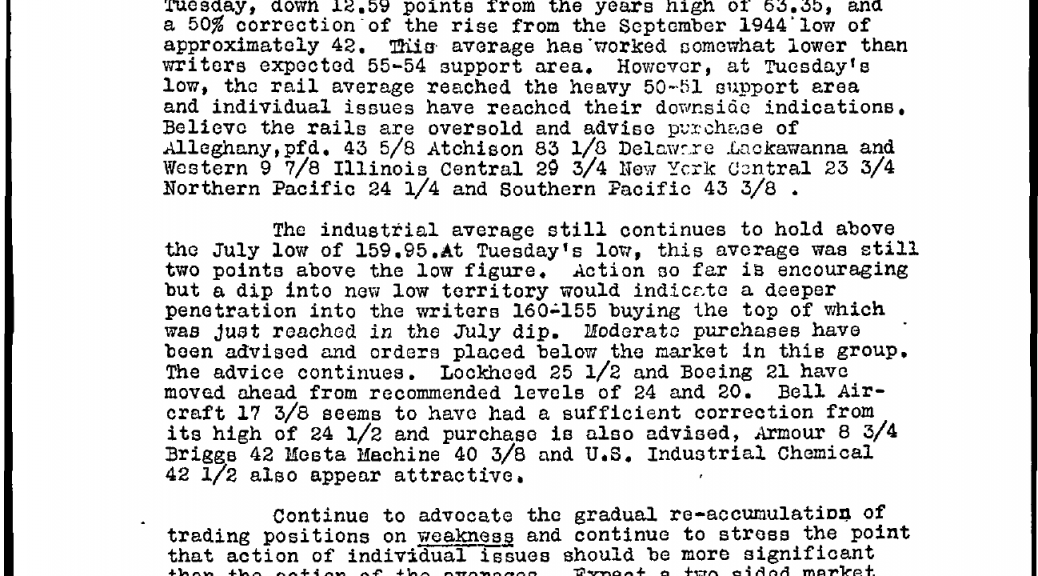 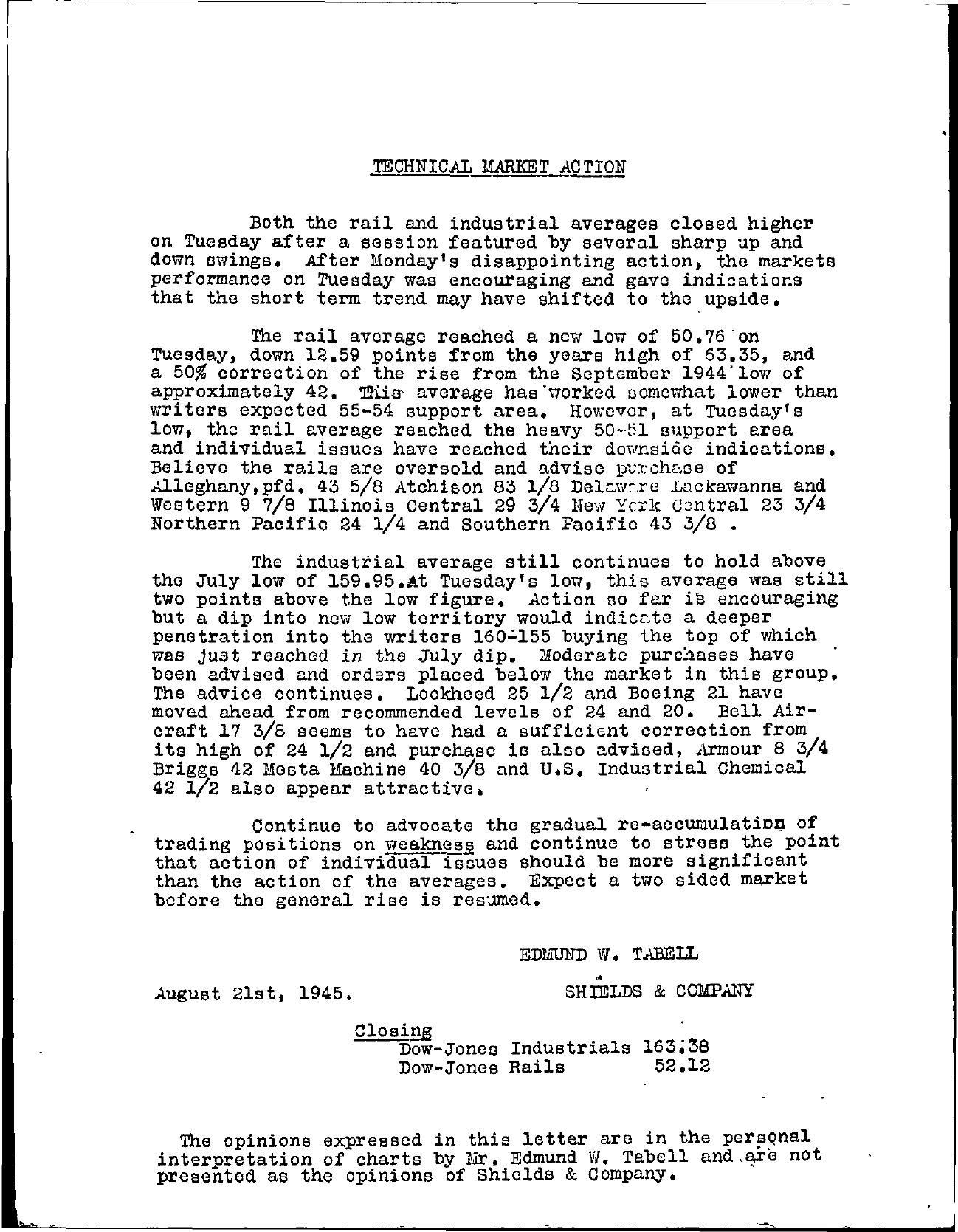 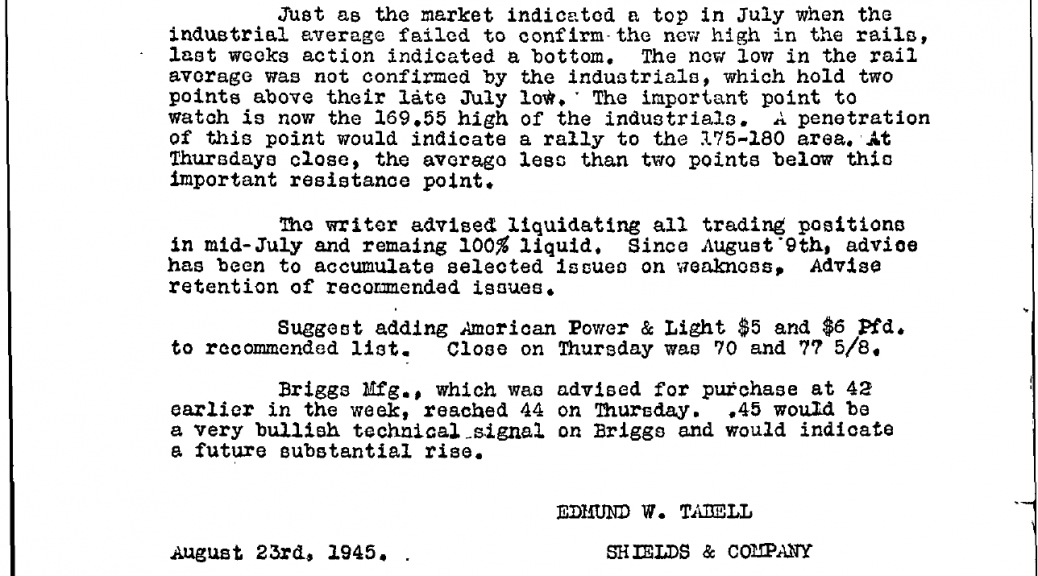 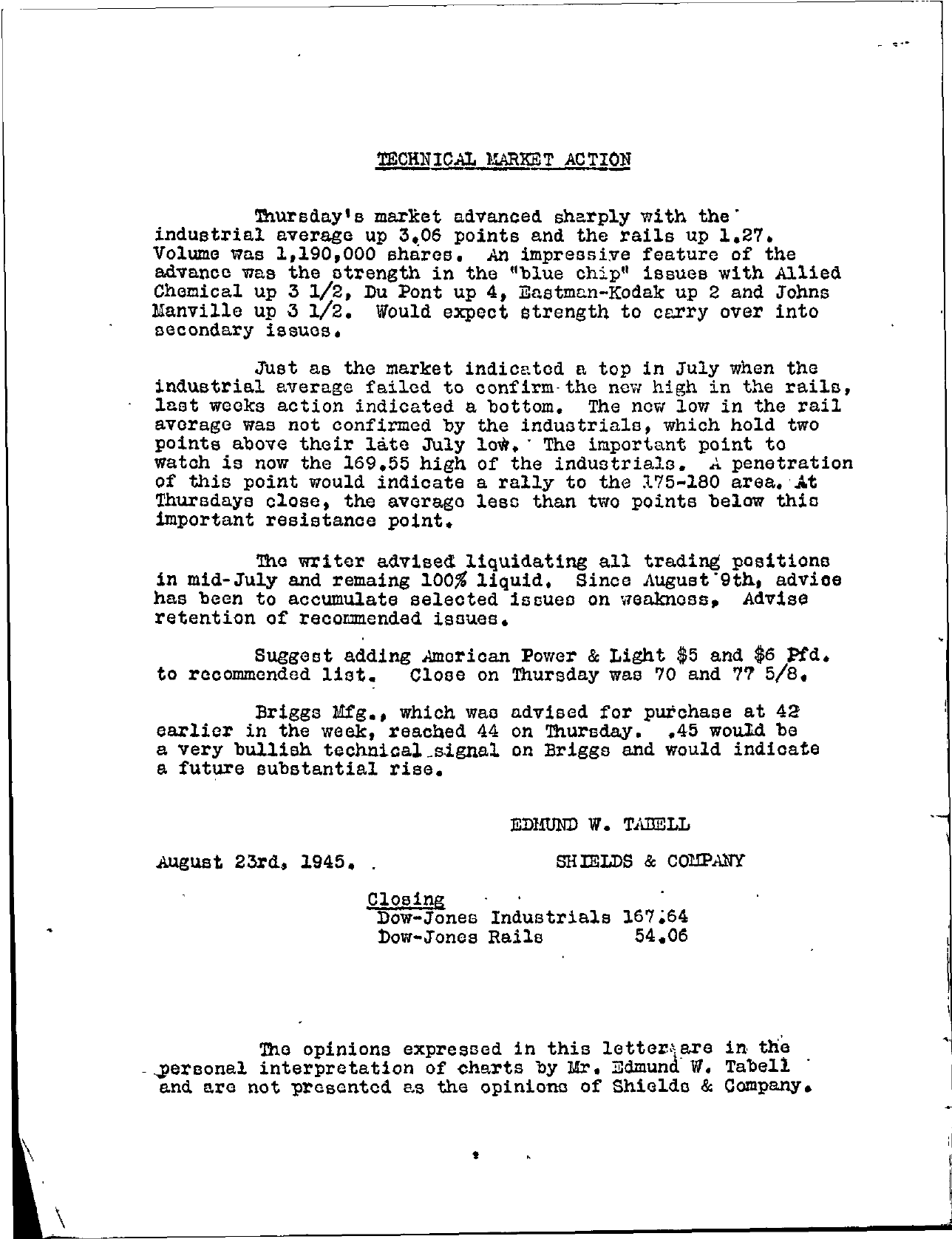 TECHNICAL MARKET ACTION Thursday's market advanced sharply with the industrial average up 3.06 points and the rails up 1.27. Volume was 1,190,000 shares. An impressive feature of the advance was the strength in the blue chip issues with Allied Chemical up 3 1/2, Du Pont up 4, Eastman-Kodak up 2 and Johns Manville up 3 1/2. Would expect strength to carryover into secondary issues. 3ust as the market indicated a top in July when the industrial average failed to confirm-the new high in the rails, last weeks action indicated a bottom. The new low in the rail average was not confirmed by the industrials, which hold two points above their late July low. The important point to watch is now the 169.55 high of the industrials. A penetration of this point would indicate a rally to the 175-180 area. At Thursdays close, the average less than two pointe below this important resistance point. The writer liquidating all trading positions in mid-July and remaining 100 liquid. Since August 9th, advice has been to accumulate selected issues on weakness. Advise retention of recommended issues. Suggest recommended list adding American st. Close on Pewer & Thursday w Laigs h7t05andand7765/P8.fd. Eriggs Mfg., which wao advised for purchase at 42 earlier in the week, reached 44 on Thursday. .45 would be a very bullish technical signal on Briggs and would indioate a future substantial rise. August 23rd. EDMUND W. TABELL SHIELDS & COMPANY Closing Dow-Jones Industrials 167;64 Rails 54.06 The opinions expressed in this letter are in the –,Personal interpretation of charts by Mr. Edmund W. Tabell and are not presented as the opinions of Shields & Company. 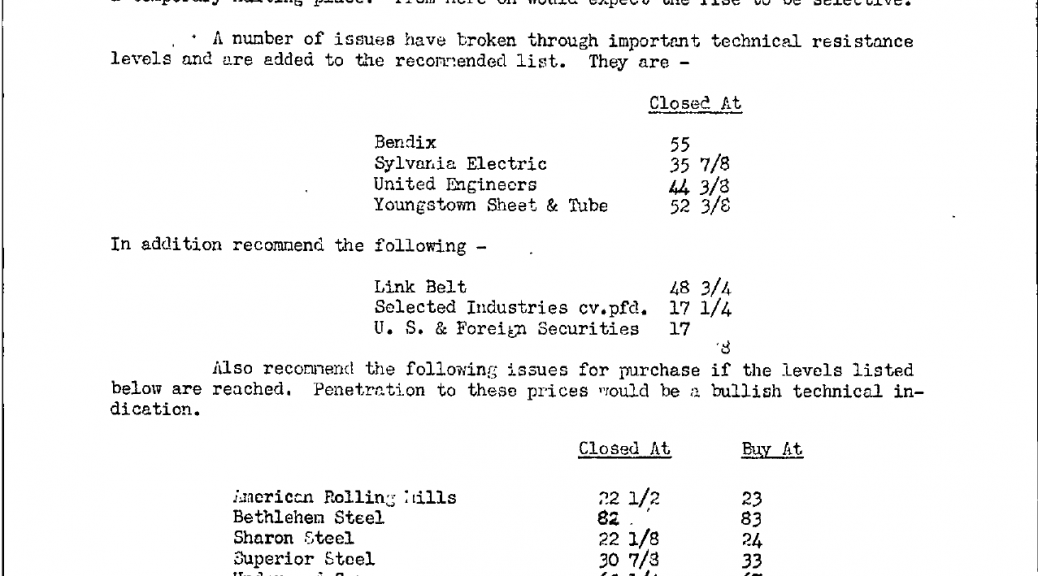 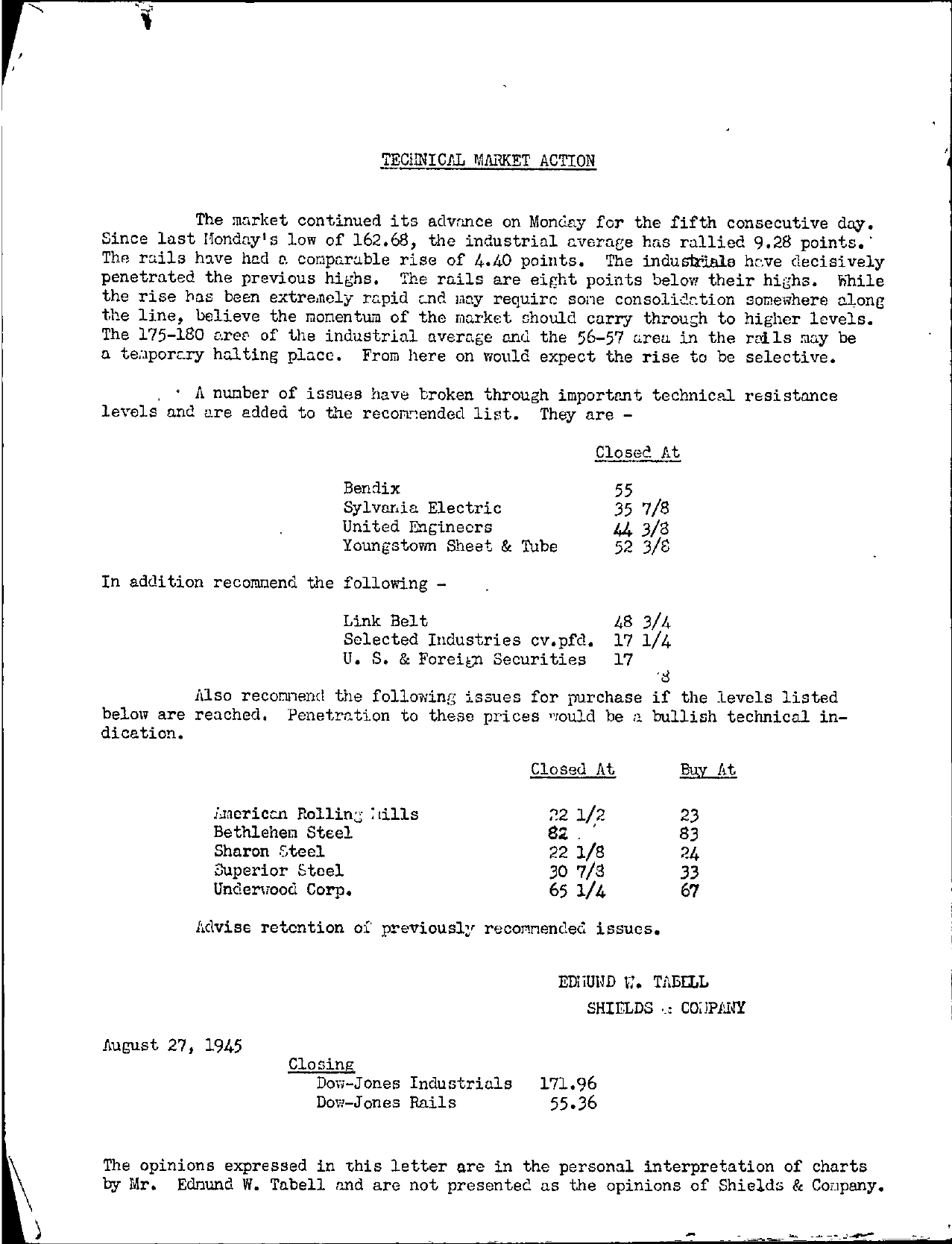 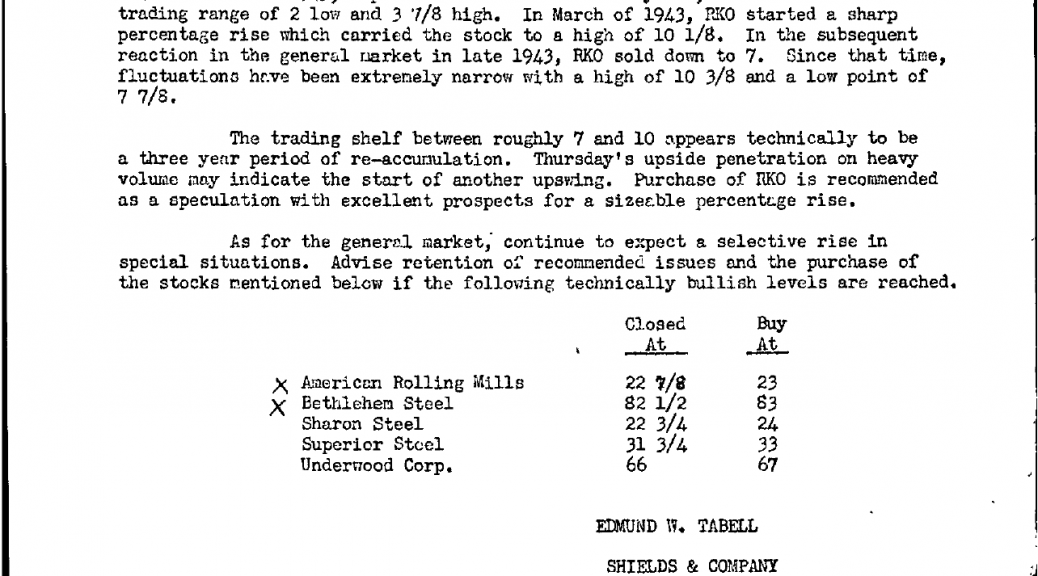 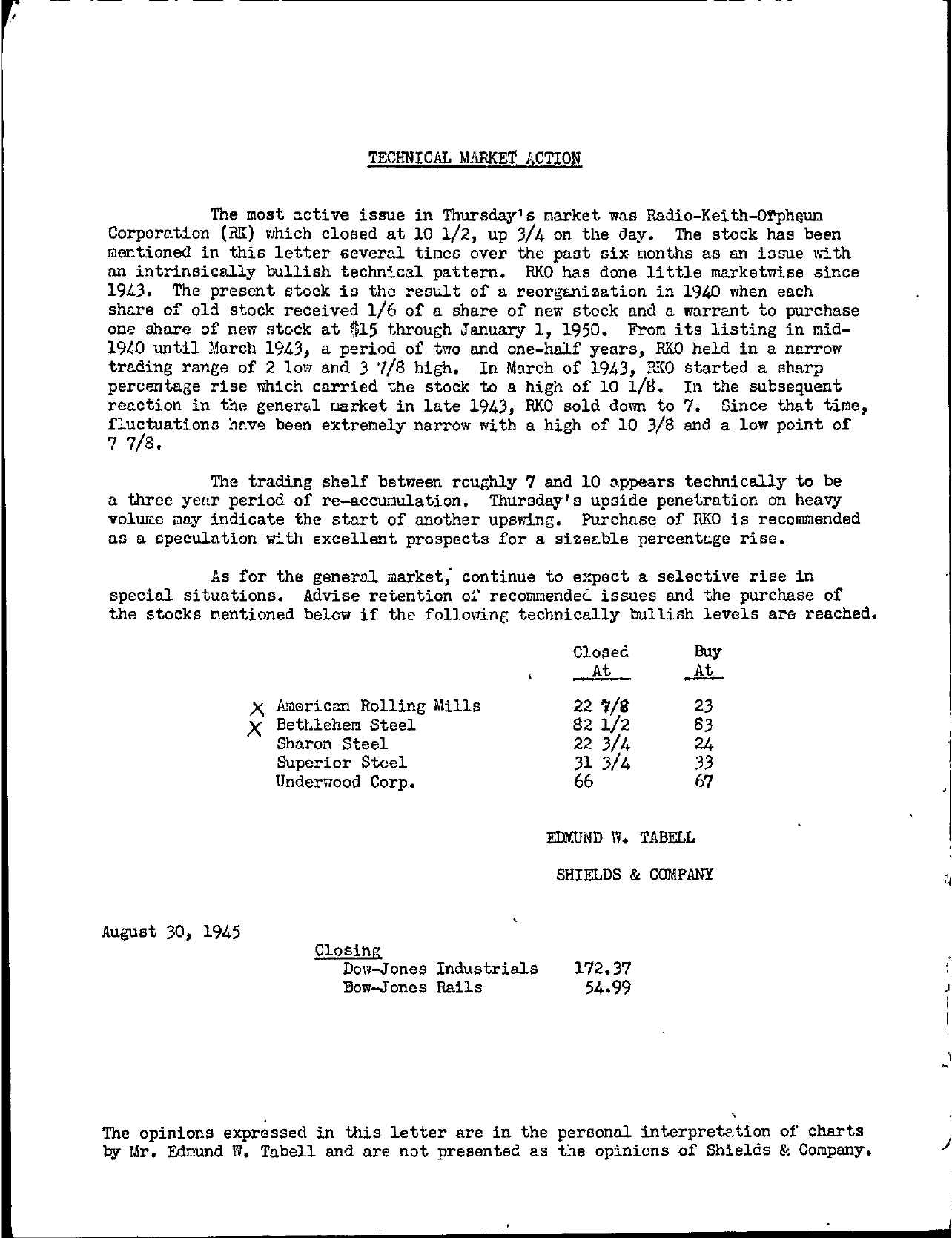