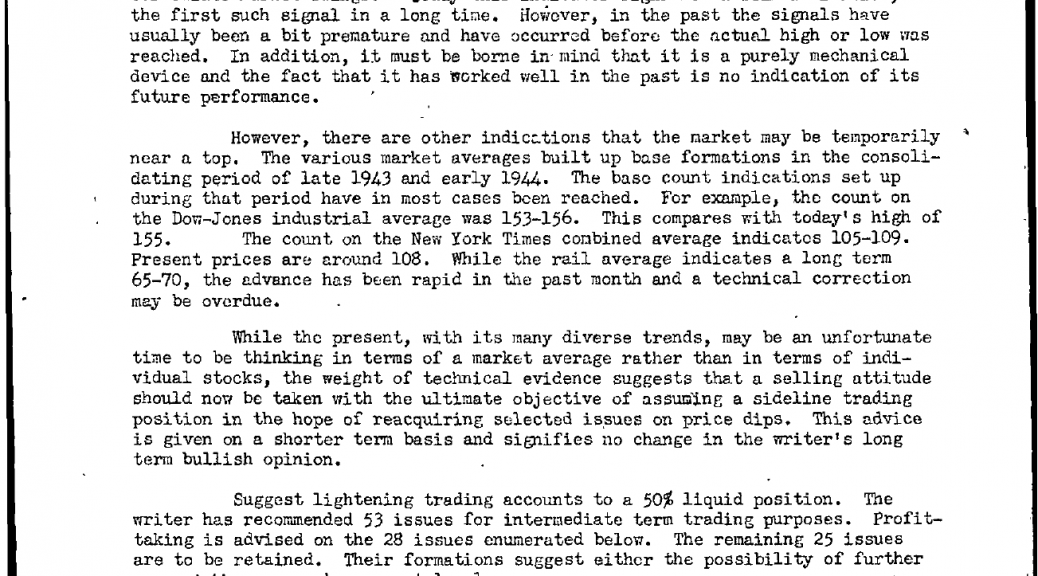 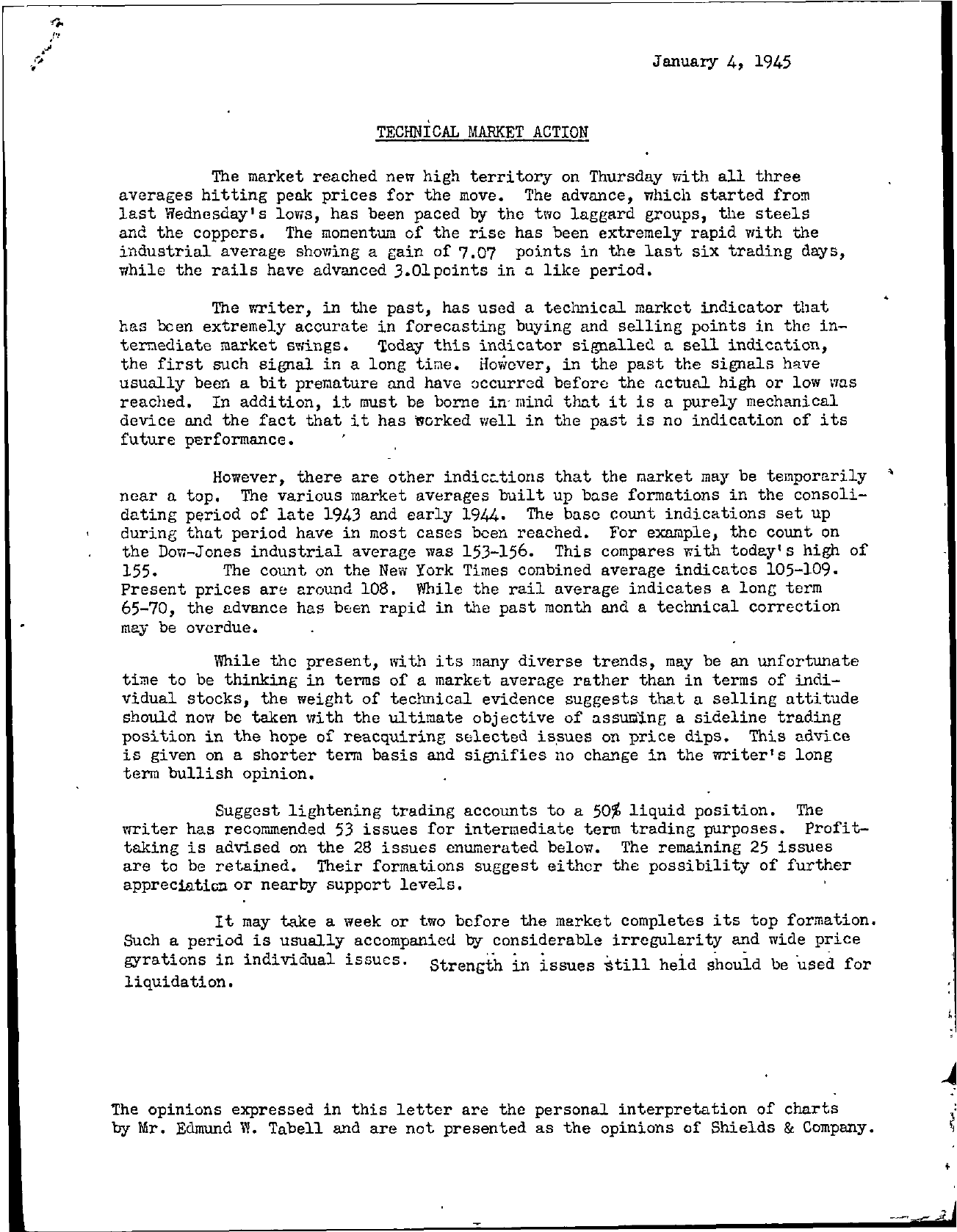 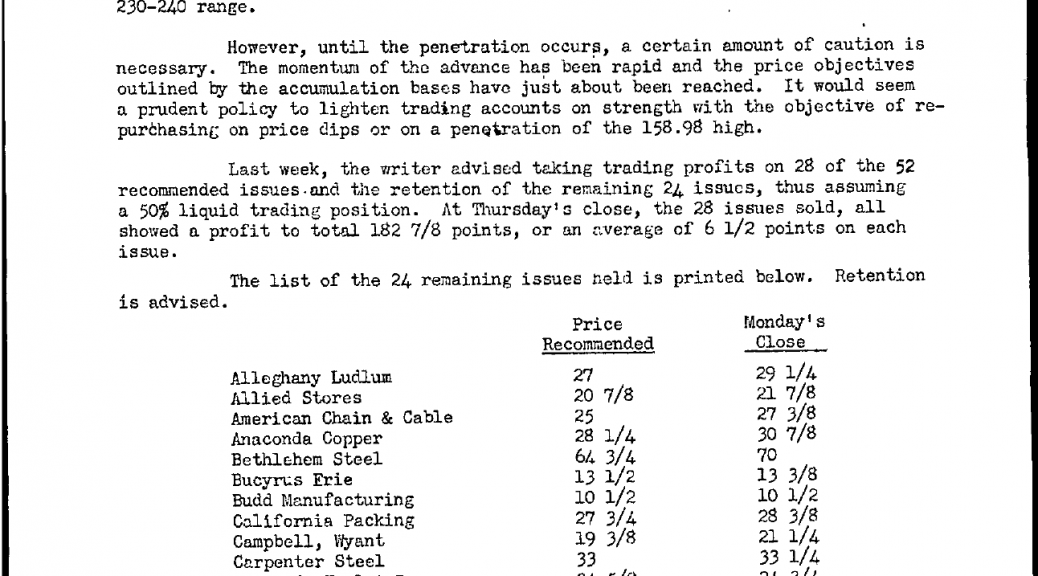 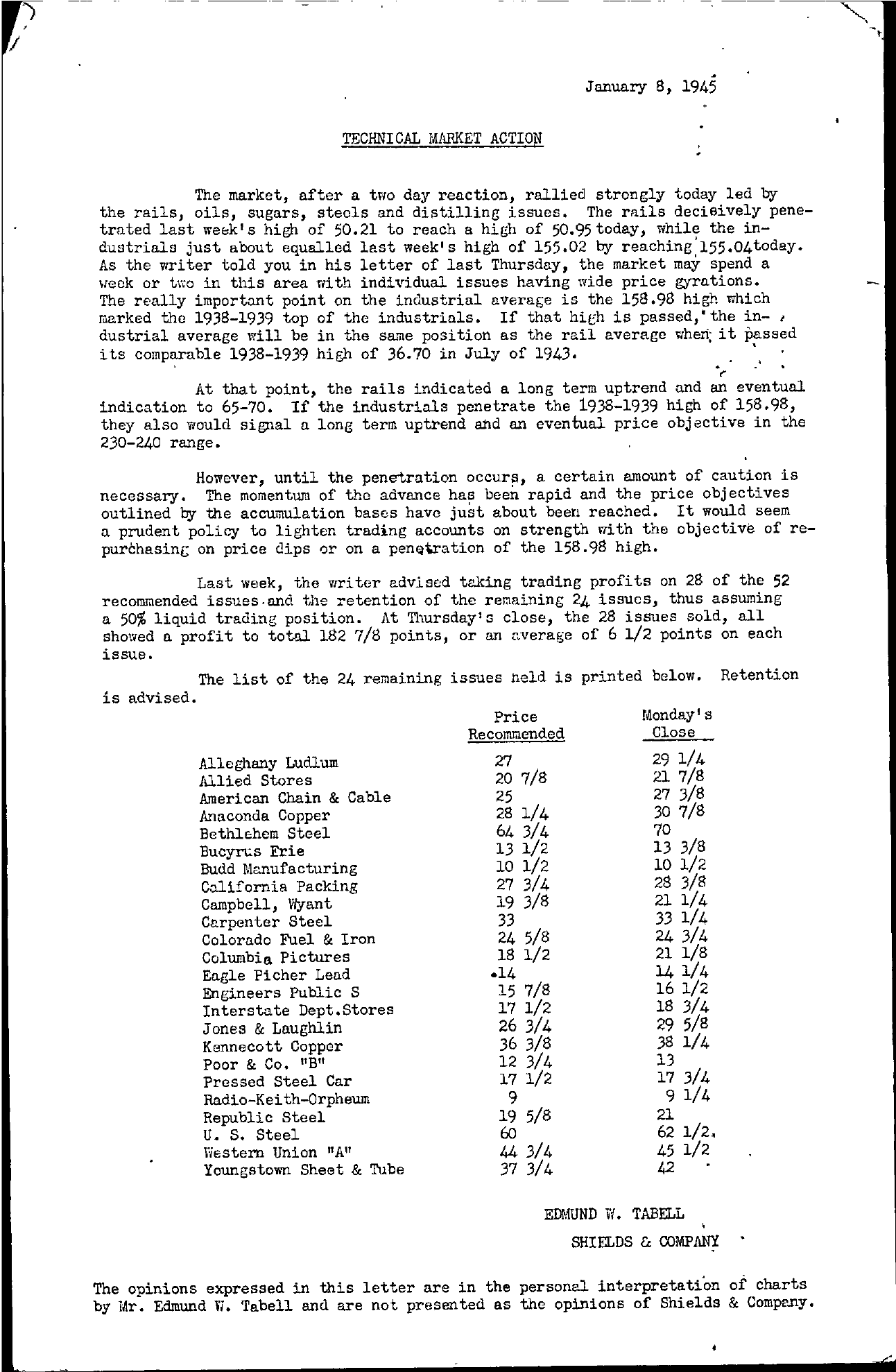 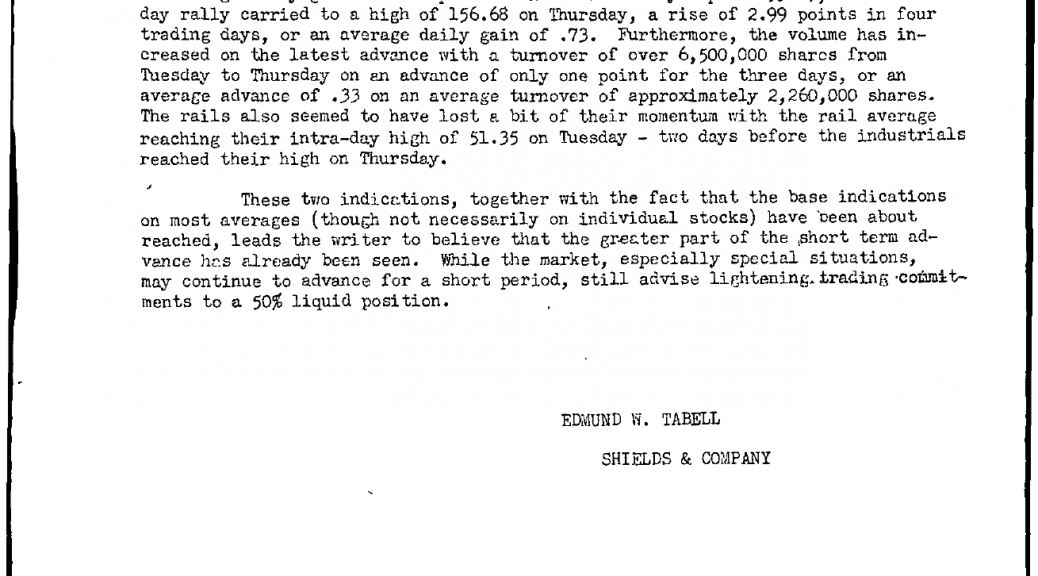 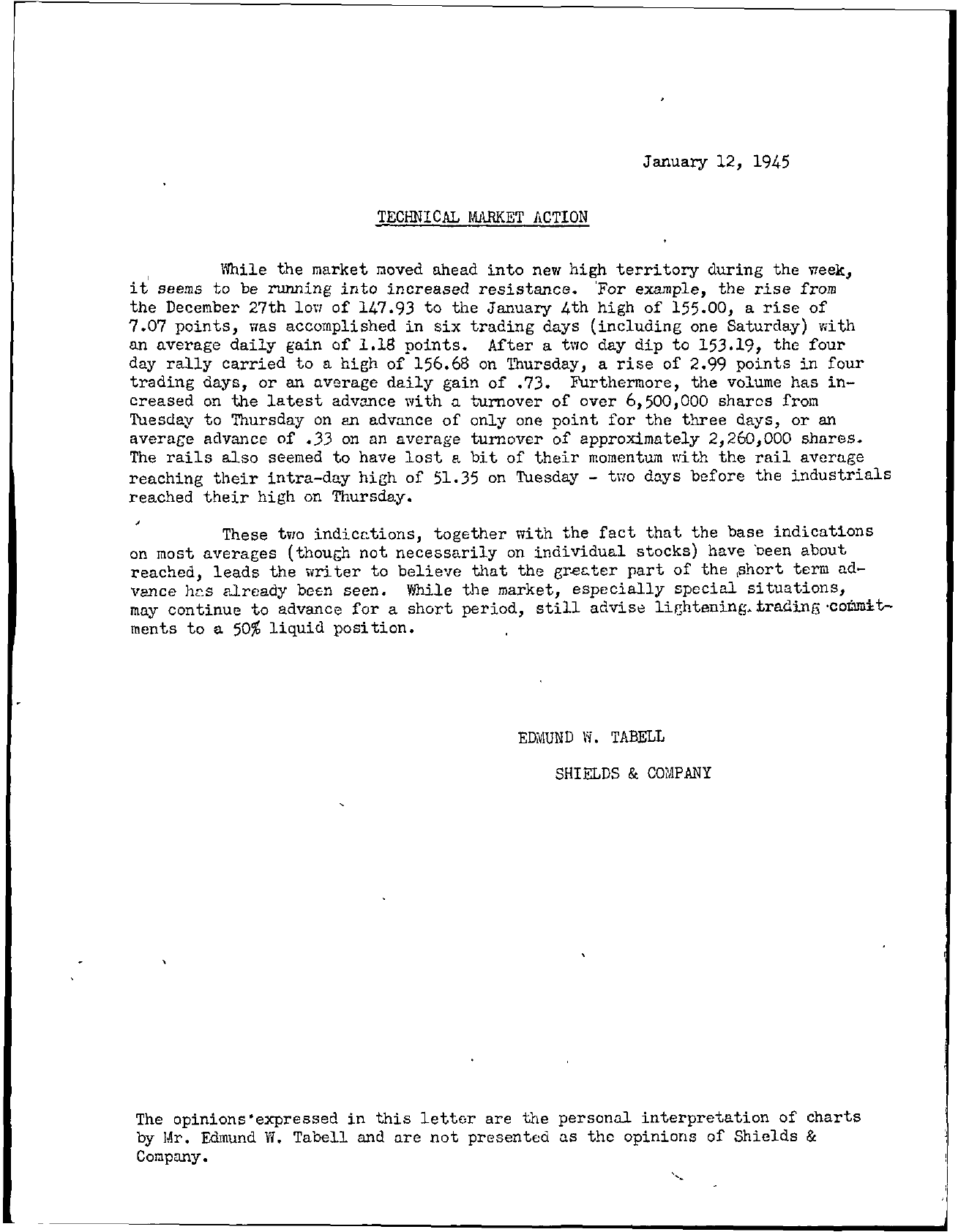 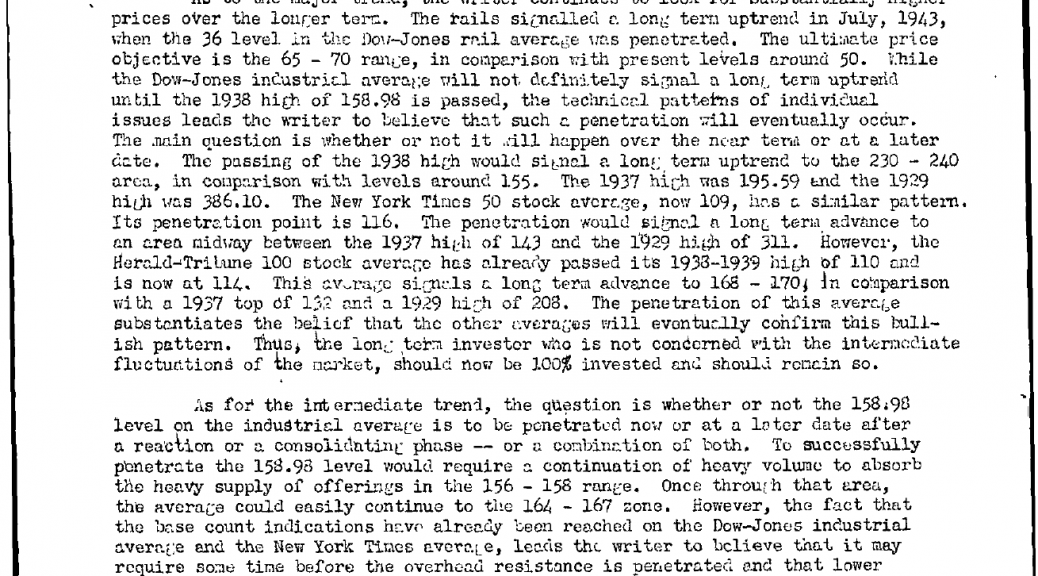 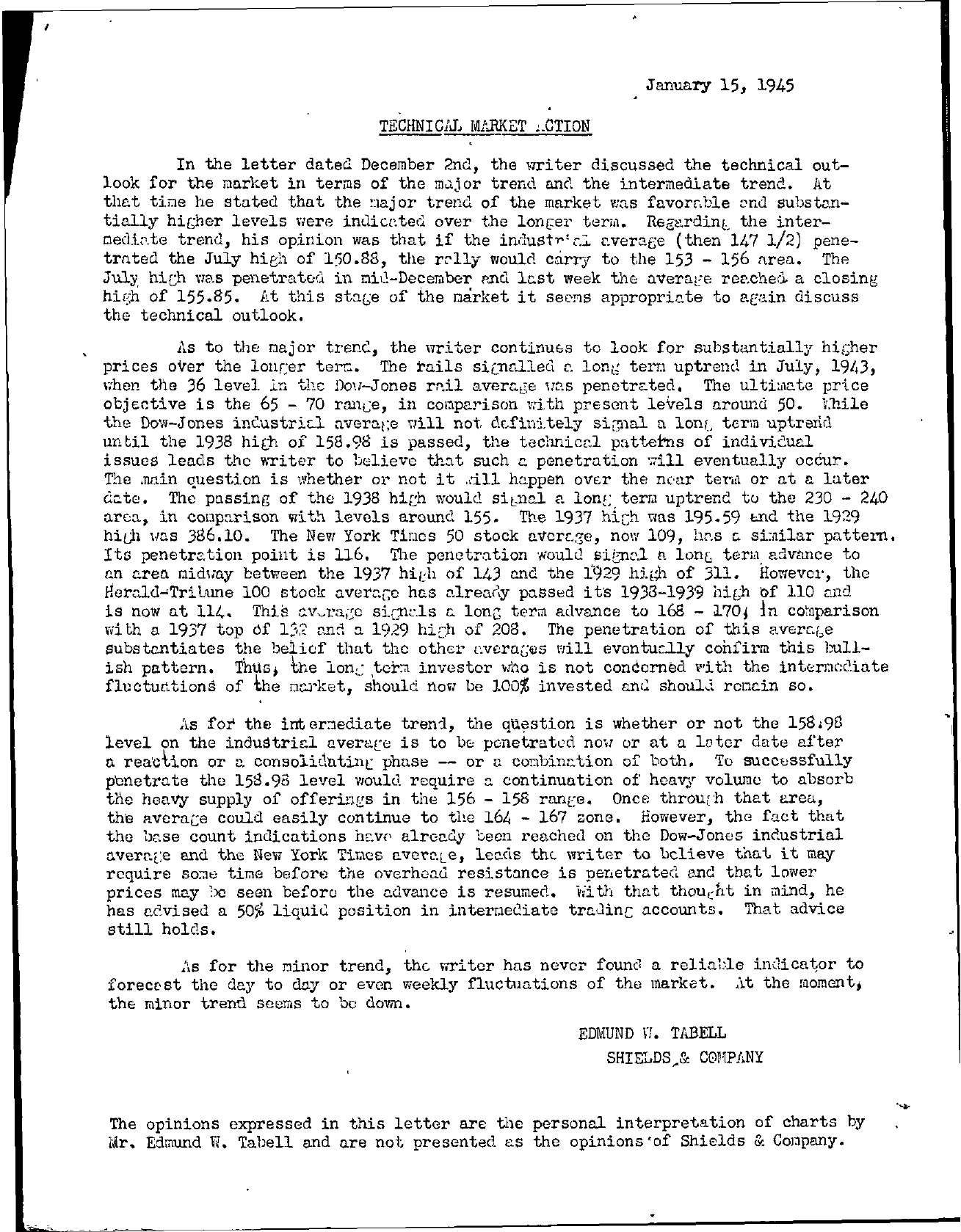 January 15, 1945 TECHNICAL MARKET ACTION In letter dated December 2nd, the writer discussed the technical outlook for the market in terms of the major trend and the intermediate trend. At that time he stated that the trend of the market was favorable end substantially higher levels were indicated over the long term. Regarding the intermediate trend, his opinion was that if the industrial average (then 147 1/2) penetrated the July high of 150.88, the rally would carry to the 153 – 156 area. The July high was penetrated in mid-December and last week the average reached a closing high of 155.85. At this stage of the market it seems appropriate to again discuss the technical outlook. As to the major trend, the writer continues to look for substantially higher prices over the longer term. The rails signaled a long term uptrend in July, 1943, when the 36 level in the Dow-Jones rail average was penetrated. The ultimate price objective is the 65 70 range, in comparison with present levels around 50. While the Dow-Jones industrial average will not definitely signal a long term uptrend until the 1938 high of 158.98 is passed, the technical patterns of individual issues leads the writer to believe that such a penetration will eventually occur. The main question is whether or not it will happen over the near term or at the later date. The passing of the 1938 high would signal a long term uptrend to the 230 240 area, in comparison with levels around 155. The 1937 high was 195.59 and the 1929 high was 386.10. The New York Times 50 stock average, now 109, has a similar pattern. Its penetration point is 116. The penetration would signal a long term advance to an area midway between the 1937 high of 143 and the 1929 high of 311. However, the Herald-Tribune 100 stock average has already passed its 1938-1939 high of 110 and is now at 114. This average signals a long term advance to 168 170, in comparison with a 1937 top of 132 and a 1929 high of 208. The penetration of this average substantiates the belief that the other averages will eventually confirm this bullish pattern. Thus, the long term investor who is not concerned with the intermediate fluctuations of the market, should now be 100 invested and should remain so. As for the intermediate trend, the question is whether or not the 158.98 level on the industrial average is to be penetrated now or at a later date after a reaction or a consolidating phase or a combination of both. To successfully penetrate the 158.98 level would require a continuation of heavy volume to absorb the heavy supply of offerings of the 156 158 range. Once through that area, the average could easily continue to the 164 167 zone. However, the fact that the base count indications have already been reached on the Dow-Jones industrial average and the New York Times average, leads the writer to believe that it may require some time before the overhead resistance is penetrated and that lower prices may be seen before the advance is resumed. With the thought in mind, he has advised a 50 liquid position in intermediate trading accounts. That advice still holds. As for the minor trend, the writer has never found a reliable indicator to forecast the day to day or ever weekly fluctuations of the market. At the moment, the minor trend seems to be down. EDMUND W. TABELL SHIELDS & COMPANY The opinions expressed in this letter are the personal interpretation of charts by Mr. Edmund W. Tabell and are nto presented as the opinions of Shields & Company. 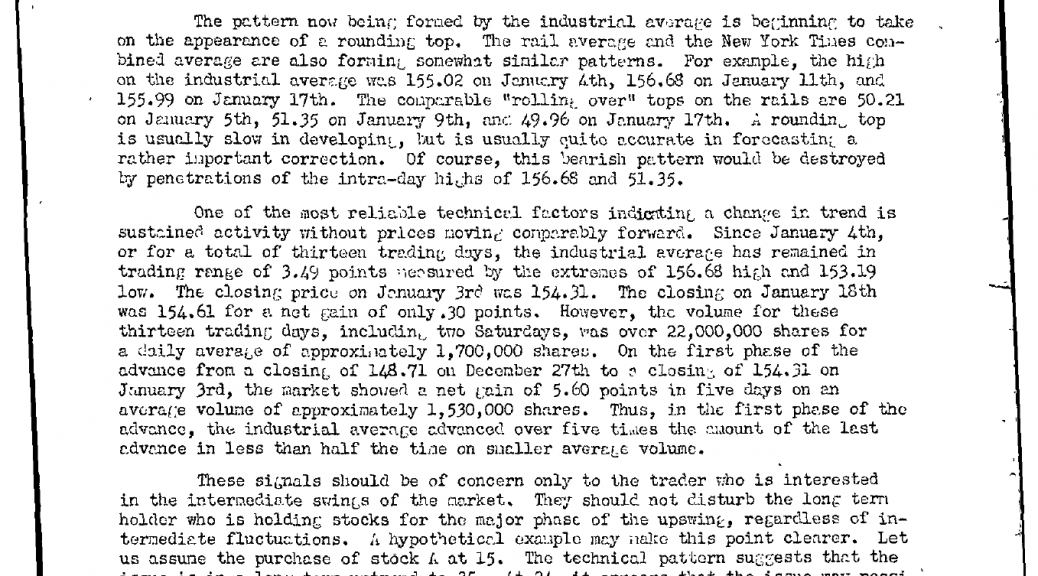 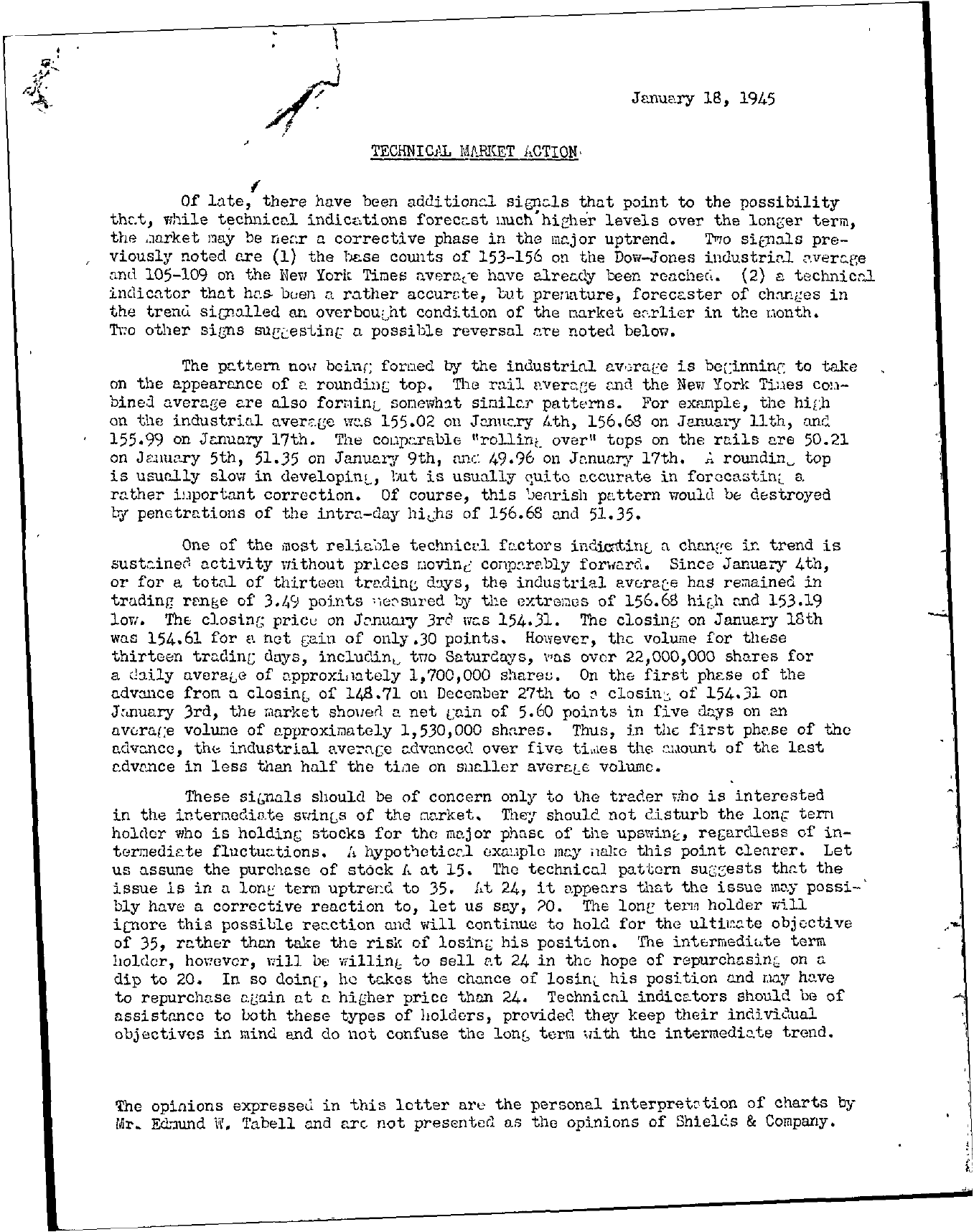 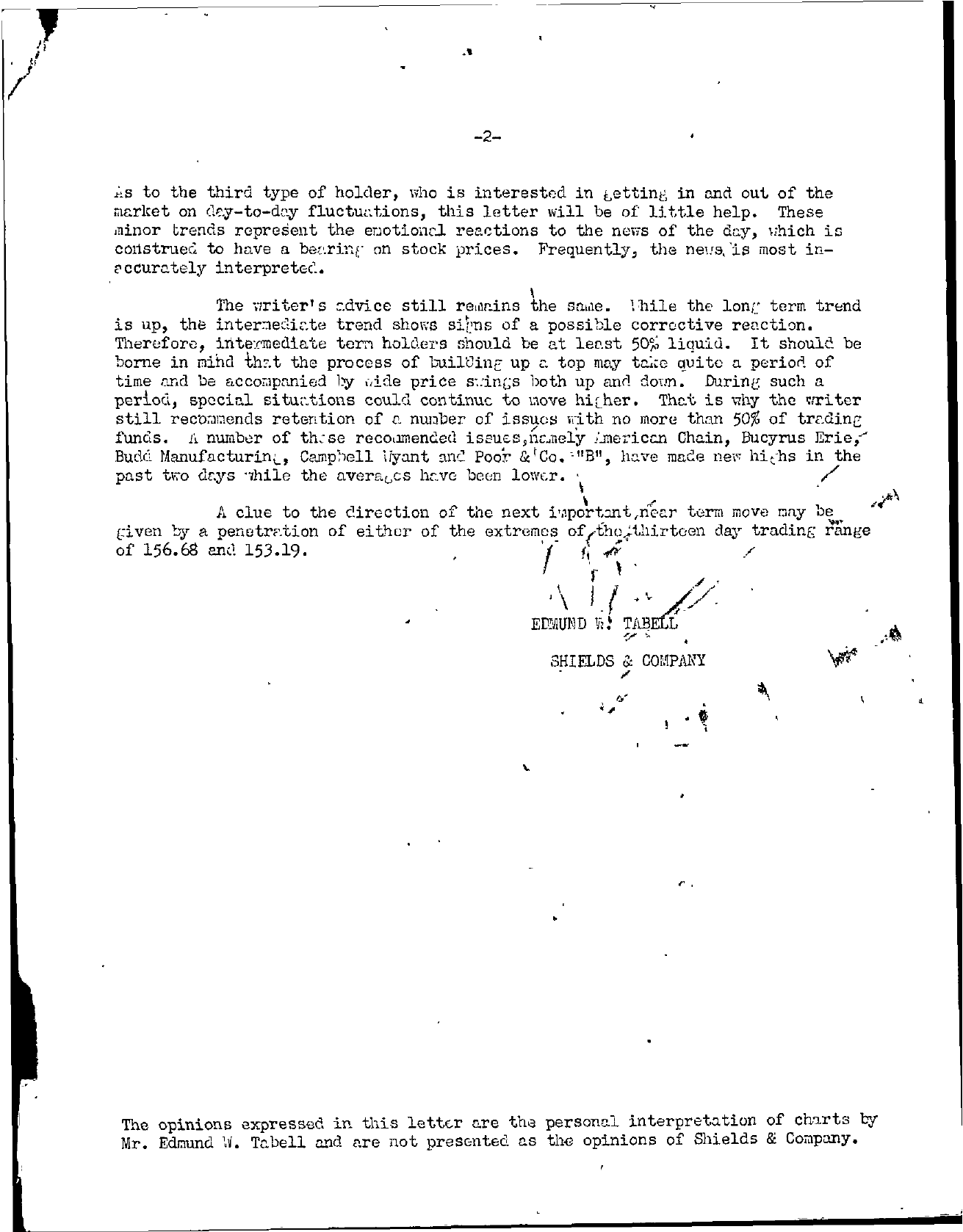 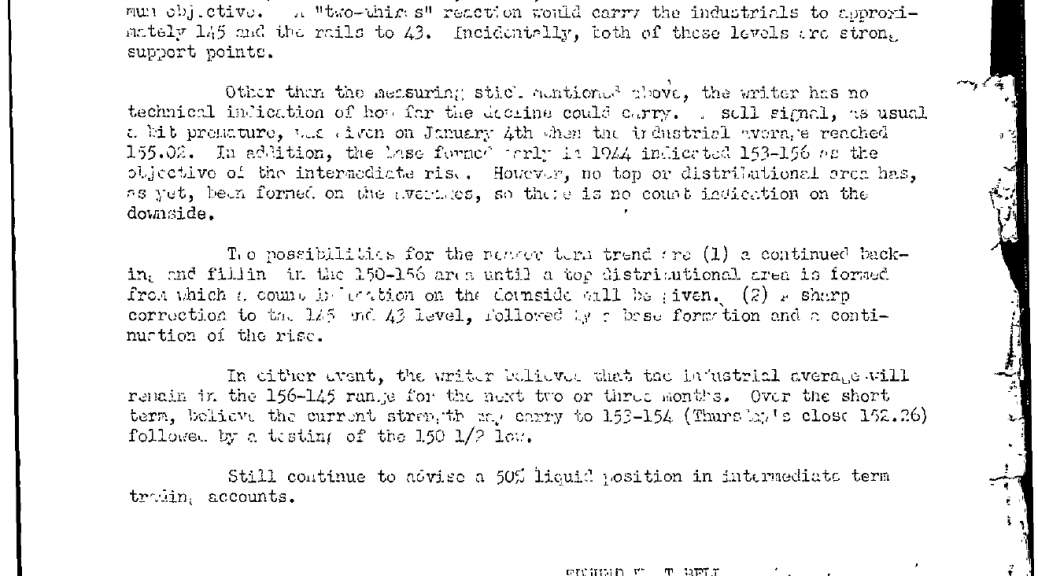 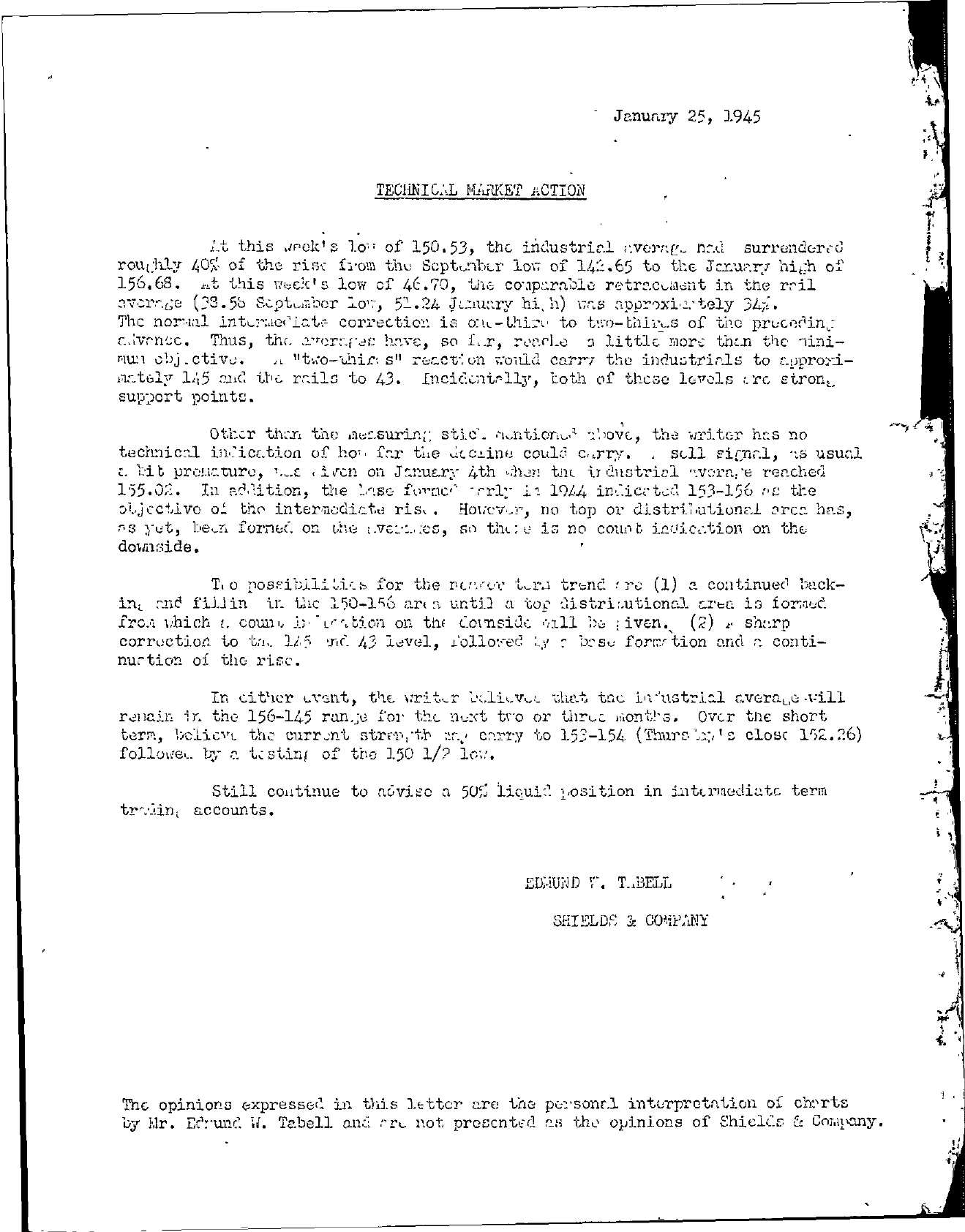 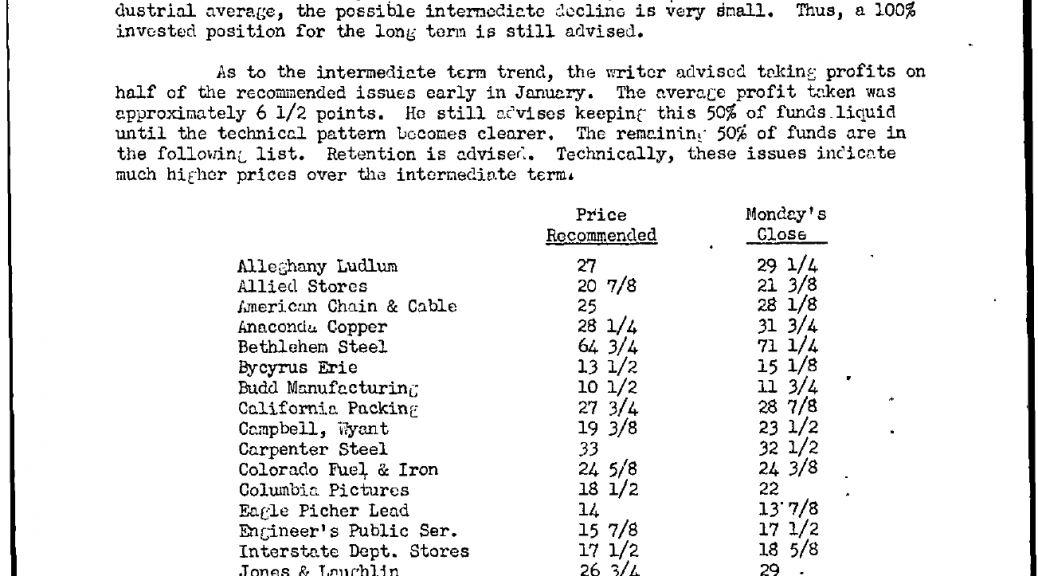 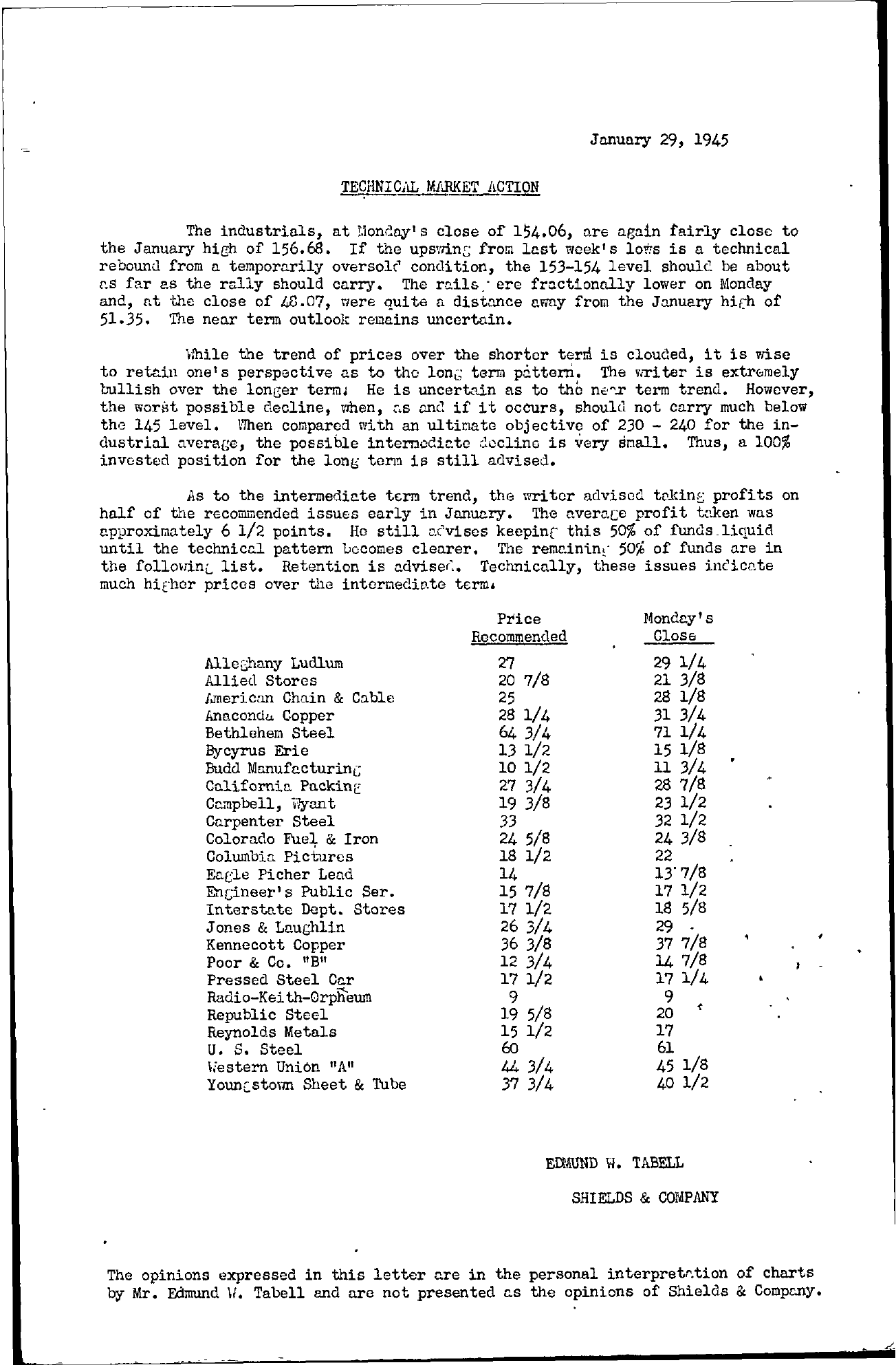